The junk food industry is getting sneakier in its tactics to entice people into consuming its concoctions.
AlterNet / By April M. Short 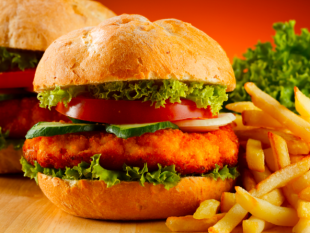 With the exposure of troubling obesity rates, outrage over undisclosed genetically engineered wheat (and other) crops, the successful worldwide March Against Monsanto effort in May and statewide bans of GE crops that followed, the US citizenry is expanding its awareness and concern about food health. The junk food industry is responding by getting sneakier in its tactics to entice, exploit and beguile people into consuming its concoctions.

Here are a few of the most disturbing deceptions the industry is using to keep Americans hooked on its junk.

1. Branding Processed Foods to Look “Natural”
Those grill marks on your burger? Not real. They were put there by the factory, just like a pre-torn blue jean purchased at a name-brand store. Junk food companies are branding their foods to have a more natural, homemade appearance—and the painful, Orwellian doublespeak-style irony is that to do so actually requires more processing than ever. Rather than switch to ingredients that are actually healthier and less processed, food engineers at companies with notoriously processed products—namely Kraft, Wendy’s, McDonald’s and Domino’s, among others—are responding to concerns surrounding overly processed foods with an unhealthy and deceiving facade of healthy looking foods. Kraft Foods engineers spent two years manufacturing a Carving Board line process that would create uneven turkey slabs, and Wendy’s intentionally created curvier “natural squares” out of perfectly square beef chunks so the squares would appear less processed.

Similarly, the Egg White Delight McMuffin at McDonald’s is going for a squiggly circle rather than the disturbingly perfect, round animal product disc that is characteristic of the Egg McMuffin. Domino’s pizza churners are instructed to tweak the perfect rectangles on their “Artisan Pizzas” to achieve a natural crudeness of homemade pies. Additionally, Gawker reports that Hillshire Brands Company—deceptively known as Hillshire Farms—is working to achieve the “wholesome” look. After customers requested a “grainer appearance” of the company’s poultry wafers, their factory processes began to dye the edges of the meat slices with caramel food coloring. According to Gawker, Hillshire’s vice president of marketing, Reggie Moore, said “it’s crucial to always be adapting their food chunks to fit changing standards of appearance, as the definition of ‘natural’ changes from customer to customer.”

2. Marketing to Children Under Guise of Charity
Anna Lappé is a mother and food health educator, known for her work as an expert on food systems and as a sustainable food advocate. She spoke in March at TedX Manhattan on behalf of her group, Food Mythbusters, about ways to combat the fast food industry’s marketing to kids. According to the Centers for Disease Control and Prevention, childhood obesity—proven to cause diabetes and other serious health conditions—has more than doubled in the last 30 years. More than a third of children and adolescents were overweight or obese in 2010, and the numbers are increasing.

While the fast food industry reported spending less on marketing to kids to the FCC, a discerning look at the numbers in the report will show otherwise. Rather than advertise less, the industry is using sneakier, less traditional channels to market to young audiences, like social media, branded “advergaming” websites and “philanthro marketing.” Lappé says following her TedX Mahattan talk she received an email from a concerned parent. Her third-grader’s class had taken a lunchtime field trip to McDonalds to hear from Ronald the clown about Ronald House Charities.

“The trip was under guise of charitable giving, but what it meant in effect was two third-grade classes, during the school day, going to McDonalds to eat lunch with their teachers,” Lappé says.

Lappé says that kind of under-the-radar “philanthro marketing” is a common tactic for fast food companies to reach young audiences, and points out that while it exposes kids to fast food brands, it is not reported as “marketing” to the FCC and other regulating organizations. Food companies are also using the Internet and social media to keep in touch with youth, including some websites, like McDonalds’ Ronald.com, that are marketed to kids as young as preschool-aged.

“They’re called advergames, but they’re videogames embedded in websites,” says Lappé. She adds that, while marketing to kids is inherently unethical, social media marketing is worse because it is under the radar and all but unregulated.

“Children are unable to distinguish between what is entertainment, educational material, and advertising,” she says. “My particular issue with social media marketing to kids is that the technology around social media is advancing at such a fast pace—much faster than advocates can monitor it, much faster than regulators can keep up with it—so that you have this space of marketing to kids that’s increasingly unregulated.”

3. Manufacturing Addiction
It is no coincidence that so many people are obese, and despite widespread knowledge that it’s bad for you, many people continue to crave junk food. Junk food companies have got it down to a science. They are creating “feel-good food” that is manufactured to include just the right combination of the sugar, fat and salt our limbic brains love. In his article, “The Jargon of Junk Food,” Paul McFedries breaks down the language of the junk food industry to show just how scientific and calculated the industry’s methods are for keeping people addicted.

“Processed-food companies increasingly turn to their legions of scientists to produce foods that we can’t resist,” he writes. McFedries notes that he is “indebted” to New York Times reporter Michael Moss, particularly for his fascinating new book Salt Sugar Fat, for many of the following terms:

Michael Moss interviewed Jeffrey Dunn, who in 2001 directed more than half of Coca-Cola’s $20 billion in annual sales as president and chief operating officer. In the New York Times article, “The Extraordinary Science of Addictive Junk Food,” Moss writes:

“[Dunn] drew from the bag of tricks that he mastered in his 20 years at Coca-Cola, where he learned one of the most critical rules in processed food: The selling of food matters as much as the food itself.”

Want to Get Americans Off Junk Food? Pay Them a Living Wage

Why Americans are fat

A Special Offer for You!