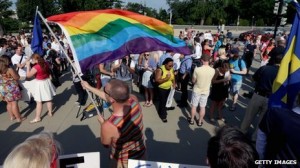 The US Supreme Court has struck down a law denying federal benefits to gay couples and cleared the way for same-sex marriage in California. The justices said that the Defense of Marriage Act, known as Doma, discriminated against same-sex couples. They declined to rule on California’s prohibition of gay marriage, known as Proposition 8, in effect allowing such unions to resume in the state.

Opinion polls indicate that most Americans support same-sex marriage. Wednesday’s decisions do not affect the bans on gay unions enshrined in the constitutions of more than 30 US states. But the California ruling means that 13 US states and the District of Columbia now recognise same-sex marriage.

We are more free 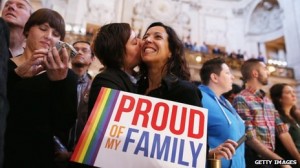 The Doma opinion grants legally married gay men and women access to the same federal entitlements available to opposite-sex married couples. These include tax, health and pension benefits and family hospital visits. Narrow victories perhaps, but there was evident delight among the overwhelming majority of those gathered in the hot sun outside the Supreme Court. After today, public and legal opinion are more closely aligned. No consensus yet, but narrow majorities in favour of gay couples being allowed to marry and enjoy the same rights as their fellow, straight citizens. The practical implications of today’s rulings may be narrow (they only involve 13 states and the District of Columbia), but it was the symbolism of the moment that thrilled the crowd. They know there will be lots of battles ahead. But for the first time, the Supreme Court has attempted to make sense of the rules around gay marriage. For most of those who gathered in the heat outside this great temple of law, today’s results suggest the tide of history is with them.

The landmark 5-4 rulings prompted celebrations from gay rights advocates outside the Supreme Court in Washington DC and nationwide. The legal challenge to Doma was brought by New York resident Edith Windsor, 83. She was handed a tax bill of $363,000 (£236,000) when she inherited the estate of her spouse Thea Speyer – a levy she would not have had to pay if she had been married to a man.

“Doma writes inequality into the entire United States Code,” Justice Anthony Kennedy wrote in the ruling. “Under Doma, same-sex married couples have their lives burdened, by reason of government decree, in visible and public ways,” the decision added. “Doma’s principal effect is to identify a subset of state-sanctioned marriages and make them unequal.”

Lower courts had also decided in Ms Windsor’s favour. US President Barack Obama, who is on a state visit to the West African country of Senegal, said: “When all Americans are treated as equal, no matter who they are or whom they love, we are all more free.”

‘No authority’
Proposition 8 is a ban on gay marriage passed by California voters in November 2008, just months after the state’s supreme court decided such unions were legal. Two same-sex couples launched a legal challenge against Proposition 8. As the state of California refused to defend it, the group that sponsored the measure stepped up to do so. But on Wednesday, the US Supreme Court said a private party did not have the right, or “standing”, to defend the constitutionality of a law.

“We have no authority to decide this case on the merits,” Chief Justice John Roberts wrote in the ruling, which was not split along ideological lines. The court also said the party defending the ban could not demonstrate that they would suffer injury if the law were to be struck down.

Their opinion leaves in place a ruling by a lower court, in San Francisco, that struck down Proposition 8. California Governor Jerry Brown is ordering county officials statewide to comply. The four dissenting Supreme Court justices said they believed they should have addressed the constitutional question of same-sex marriage before them in the Proposition 8 case. Further litigation could lie ahead for the California ban, analysts say.

About 18,000 same-sex couples were married in that state in the less than five months same-sex marriages were permitted there. Doma was signed into law in 1996 by former President Bill Clinton after it was approved in Congress with bipartisan support. But it was subsequently struck down by several lower courts.

In 2011, President Obama said that while he would continue to enforce Doma, his administration would not defend it in court. So Republicans from the House of Representatives argued in favour of the measure. House Speaker John Boehner, the top Republican in Congress, said he was disappointed with Wednesday’s ruling.

“A robust national debate over marriage will continue in the public square, and it is my hope that states will define marriage as the union between one man and one woman,” he said.

[I’m not going to let Boehner have the last word here! ‘Specially as he apparently doesn’t know what’s going on in the public square!]

(CNN)—It was a wonderful life.
That’s how Edith Windsor describes her partnership with Thea Clara Spyer. Theirs was not a fleeting romance—the women were together 42 years sharing ups and downs, laughs and tears. They also shared what they’d earned together, including from Windsor’s job as a programmer with IBM and Spyer’s work as a psychologist.

“We were mildly affluent and extremely happy,” Windsor said. “We were like most couples.”

But even after they married in 2007 in Toronto, some 40 years into their courtship, the two women were not “like most couples” in the eyes of the state of New York, where they lived, nor in the eyes of the U.S. government, which under the Defense of Marriage Act mandates that a spouse, as legally defined, must be a person of the opposite sex. This fact hit Windsor hard in 2009, while in a hospital after suffering a heart attack a month after Spyer’s death. As she recovered and mourned, Windsor realized she faced a hefty bill for inheritance taxes—$363,053 more than was warranted, she later claimed in court—because Spyer was, in legal terms, little more than a friend.

“It was incredible indignation,” Windsor recalled feeling. “Just the numbers were so cruel.”

This anger gave way to action. Why, she and her lawyers argued, should her relationship with Spyer be any different when it came to rights, taxes and more than a heterosexual couple? Why should Windsor have to pay, literally, for losing her soulmate — even though, by 2009, New York courts had recognized that “foreign same-sex marriages” should be recognized in the state as valid? In October, Windsor, now 83, got an answer in the form of a ruling opinion from the 2nd U.S. Circuit Court of Appeals. That court found, in her favor, that the Defense of Marriage Act violates the Constitution’s equal protection clause and thus she shouldn’t have had to pay an inheritance tax after her partner’s death. This follows a similar ruling, in May, from another federal appeals court in Boston.

Federal appeals court strikes down Defense of Marriage Act
Neither opinion settles the matter for good. That is expected to happen next year when the Supreme Court will weigh the constitutionality of the Defense of Marriage Act through the prism of Windsor and Spyer’s story. It is one of two cases related to same-sex marriage that the high court will consider, it announced Friday. The other addresses California’s Proposition 8. Even with those cases still to be decided, Windsor said earlier this fall—when the lower court decided in her favor, three years after Spyer’s death—that she felt she could finally breathe and celebrate.
It was a day she relished, and one she didn’t entirely expect after all her heartache.

“What I’m feeling is elated,” Windsor said. “Did I ever think it could come to be, altogether? … Not a chance in hell.”

Instant chemistry in Greenwich Village
Born in Philadelphia in 1929, on the eve of the Great Depression, Windsor graduated from Temple University and earned a master’s degree, in 1957, from New York University, according to a fall 2011 story in the latter school’s alumni magazine. She had come to New York hoping for a fresh start after a brief marriage, according to the report. And professionally, she found it — working for NYU’s math department and soon entering data into its UNIVAC, one of a few dozen of the huge commercial computers then in operation. Her knack for programming eventually helped her land a job, and to excel, at IBM. But something was missing in her life, personally.

Or, as Windsor put it more succinctly, “I suddenly couldn’t take it anymore.”

In the documentary “Edie and Thea: A Very Long Engagement,” she recalled pleading with an old friend to take her “where the lesbians go.” And so Windsor spent one Friday night at Portofino, a restaurant in New York’s Greenwich Village. “Somebody brought Thea over and introduced her. And we ended up dancing,” she recalled. “And we immediately just fit,” added Spyer, on the documentary.

After reuniting two years later, according to their New York Times’ wedding announcement, their connection proved deep and lasting. In 1967, Spyer proposed marriage with a round diamond pin. A year later, they purchased a house together in Southampton, according to the NYU Alumni Magazine story. Yet while the gay rights’ movement took off after the 1969 Stonewall Riots, which occurred while Windsor and Spyer were vacationing in Italy, an actual marriage—a legal union—seemed out of the question.

Marriage, at last, and then heartache
Regardless, their love remained strong. On the documentary, filmed around 2007, Spyer said, “Each one of us, in fact, looks different from how we looked when we met. But if I look at Edie now, she looks exactly the same to me. Exactly the same.” Windsor had halted her new career as a gay rights activist to help care for her partner, who suffered from multiple sclerosis. And it was after getting a “bad prognosis (that) I had another year to live and that was it” that Spyer proposed again.

Video shows Spyer being pushed through the airport in her wheelchair. It was from that seat—on May 22, 2007, at Toronto’s Sheraton Gateway Hotel—that she gave her vows to make their marriage official in Canada.

“I, Thea Spyer, choose you, Edith Windsor, to be my lawful, wedded spouse,” she said. “For richer and for poorer, in sickness and in health, until death do us part.”

Having happily gone four decades without, Windsor soon realized how much the marriage meant to her. It made her and Spyer’s love legitimate and all the more real.

“It’s different because somewhere you’re a hidden person, and suddenly you’re a citizen of the world,” she said in October.

But what happened as Spyer’s condition worsened, and after her death, proved a stark reminder they were not legally united in their own country. And the fact that New York legalized same-sex marriage in 2011 didn’t mean that Windsor, for example, would suddenly get back the hundreds of thousands of dollars in inheritance tax that she’d given to the government. That could happen, however, if the Supreme Court upholds the appeals court ruling. That is Windsor’s hope, as is that whether a committed couple is heterosexual or homosexual becomes irrelevant within the next decade.

In the meantime, Windsor said she’s proud to fight for something bigger than herself and the legitimacy of her union with Spyer. She hopes, through her struggle, to help make it so gay teenagers can “fall in love knowing there’s a future,” that children of gay couples won’t feel the need to explain their families, and that homophobia becomes a thing of the past.

Join the ACLU in the Defense of Marriage