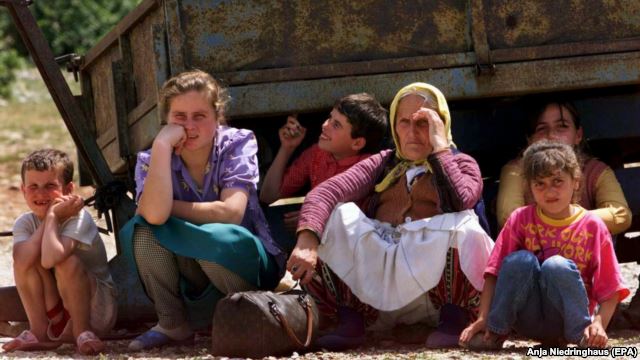 An estimated 20,000 women and girls were subjected to organized gang-rapes by Serbian and Yugoslav forces during the 16-month Kosovo War.

PRISTINA—Jeta, a Kosovar Albanian from rural Drenica Valley, used to spend most of her days in the kitchen, sometimes baking as many as 17 loaves of bread a day to feed her husband, children, and grandchildren.

The early autumn days of September 1998 were not much different. The men of her village, including Jeta’s husband and elder son, had departed en masse to hide from Serbian and Yugoslav forces that had been fighting Kosovo Albanian rebels since February. Serbian tanks had already entered the area, and many mothers and children were leaving as well. But Jeta decided to stay at home, believing the soldiers wouldn’t harm defenseless women and children.

When she saw a tank full of Serbian soldiers pull in front of her house, she realized her mistake.

“They jumped out of the tank into our yard,” says Jeta, who asked that her real name not be used. “There were five armed men. They came in the house, one after another. And I remember them putting black masks over their faces immediately.

“I told my daughters to come stand close to me. We gathered together, and they ordered us to go into the basement of the house. And that’s where the tragedy took place. My youngest was 13,” Jeta says through tears.

As her grandchildren and a disabled son hid from the soldiers upstairs, Jeta and her three daughters were held captive in the basement, where they were beaten and brutally raped for hours.

Jeta, who is now in her 50s but looks far older, says she never lost consciousness during the attack.

“I was aware of what was happening, but at some point I stopped thinking,” she says in a pained whisper. “I just waited to see what would happen next. Were we going to die? Would we get up? Were they going to kill us? I wasn’t afraid of dying; I even wanted to die. My oldest daughter asked to be killed. She was screaming, ‘Kill us, don’t let us live!'”

Jeta, her expression tired and hopeless, crosses her hands and puts them on top of her head. She seems breathless and asks for water. “She’s been psychologically traumatized ever since. Another one of my daughters had her left shoulder dislocated. I told my daughters to stay silent, to be quiet…. I didn’t know how to make their fear go away,” she says.

‘Deliberate’ Campaign
Jeta and her daughters are among an estimated 20,000 women and girls who were subjected to organized gang-rapes by Serbian and Yugoslav forces during the 16-month Kosovo War. Human Rights Watch said the rapes—carried out mainly by paramilitary forces, often in view of the victims’ families—were “used deliberately as an instrument to terrorize the civilian population.” (Kosovar militants were also accused of rape, although the number of such cases is believed to be far lower.)

In Kosovo, as in Bosnia-Herzegovina—where as many as 40,000 mainly Muslim women were systematically raped by Bosnian Serb forces—the object was humiliation and social stigma. In the case of Jeta and her daughters, it worked. When their attackers finally left at nightfall, a male relative came to the house. When he heard what had happened, he ordered them to “bury” the experience, saying the rapes were “a bigger tragedy than being murdered.”

Jeta acquiesced, afraid of bringing shame and isolation on her family. She remained silent for 15 years, even as she has watched the heavy toll it has taken on her family. Three of her daughters have left the country. One got married, only to be rejected by her husband when he found out about the rape. The fourth daughter, disabled since birth, remains at home.

Jeta herself has never told her husband about the rapes. Instead, she said she and her daughters were briefly captured by Serbs, as a way of explaining the anxiety and depression they’ve suffered ever since. Her husband says rape would dishonor the family; during the war, he threatened more than once to torture and abandon her if she were ever “touched” by a Serb.

“How can you talk to such a person about this?” asks Jeta, who admits she told her husband she was traveling to Pristina for a doctor’s appointment rather than an interview with a reporter about her wartime ordeal. Only a tiny handful of women—possibly as few as five—have ever spoken to the press about their rapes. Even using a fake name, Jeta is understandably nervous.

“I would really prefer it if they had killed me, instead of letting me survive,” she adds. “We don’t feel any pleasure in life. When your husband doesn’t know what happened to you, then you aren’t able to express yourself to him about anything, and you never feel good. Even if we’re talking about the most beautiful moments, you’re in the worst position. And that’s the very worst thing that’s happened to us.”

Jeta and her family spent the rest of the war as refugees, forced from village to village by the Serbs’ ethnic-cleansing campaign and under threat from the NATO bombing campaign aimed at driving Serbian forces out of the Albanian-majority territory. Jeta said after the terror she and her daughters had experienced, her ordinary fears melted away, and she often found herself reaching out to help fellow refugees.

“I had lived through a real trauma, and I didn’t want other women to experience the same thing,” she says. “I couldn’t even scream anymore. I felt no fear. I told them not to fear death. I just took the attitude that we had to move forward and not look back.”

Silence Continues
That attitude persisted long beyond the war’s end in June 1999. Jeta was so fearful that word about the rapes would get out that it was 2013 before she finally sought help with the Rehabilitation Center for Torture Victims, a nongovernmental organization based in Pristina.

Even with help available, most Kosovar women have been reluctant to reach out. The center says roughly 100 rape victims have come forward to ask for counseling in services. Of those, nearly 80 percent continue, like Jeta, to hide the secret from their husbands out of fear of abandonment or abuse.

Compounding the problem is the government, which has been slow to address the issue of rape victims. It was only this March—a full 15 years after the war—that the Kosovo parliament finally agreed to extend wartime reparation benefits to victims of sexual violence.

The benefits include a monthly payment of $400—a significant sum for Jeta and her family, who currently survive on just $150 a month, plus a small pension for their invalid daughter. There’s just one problem: to apply for the support, Jeta would finally have to broach the subject of her rape with her husband.

After hiding her secret for 15 years, she’s not sure that’s a step she personally can take. But she hopes sharing her story may help persuade other Kosovars to finally acknowledge this painful chapter from the past.

“I would do anything to see men talking openly to wives who have been victimized by the enemy,” she says. “If I don’t get anything out of this entire story, maybe someone else will. I may have lost a battle, but I don’t want others to experience the same. We need support, support from the state and support from society. When that happens, that’s when we’ll be at peace.”