In a rare twist, the private telecom companies are seeking government intervention to clamp down on competition.
Alternet

The business lobby often demands that government get out of the way of private corporations, so that competition can flourish and high-quality services can be efficiently delivered to as many consumers as possible. Yet, in an epic fight over telecommunications policy, the paradigm is now being flipped on its head, with corporate forces demanding the government squelch competition and halt the expansion of those high-quality services. Whether and how federal officials act may ultimately shape the future of America’s information economy. 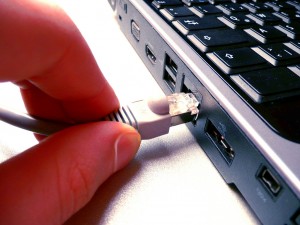 The front line in this fight is Chattanooga, Tennessee, where officials at the city’s public electric utility, EPB, realized that smart-grid energy infrastructure could also provide consumers super-fast Internet speeds at competitive prices. A few years ago, those officials decided to act on that revelation. Like a publicly traded corporation, the utility issued bonds to raise resources to invest in the new broadband project. Similarly, just as many private corporations ended up receiving federal stimulus dollars, so did EPB, which put those monies into its new network.

The result is a system that now provides the nation’s fastest broadband speeds at prices often cheaper than the private competition. As the Chattanooga Times Free Press noted a few years back, “EPB offers faster Internet speeds for the money, and shows equal pep in both uploading and downloading content, with Comcast and AT&T trailing on quickness.” Meanwhile, EPB officials tell the Washington Post that the utility’s telecom services have become “a great profit center”—an assertion confirmed by a Standard & Poor credit upgrade notice pointing out that the utility “is now covering all costs from telephone, video and Internet revenue, as well as providing significant financial benefit to the electric system.”

This is great news for local businesses and taxpayers—but it is terrible news for private telecom companies, who not only fear being outcompeted and outperformed in Chattanooga, but also fear the Chattanooga model being promoted in other cities. In response, those telecom firms have been abandoning the standard argument about the private sector. Indeed, as the Times Free Press reported last week, rather than insisting the private sector has inherent advantages over the public sector, the firms have gone to court insisting “that EPB, as a public entity, would have an edge when competing against private companies, which would be at a disadvantage when facing an entity owned by taxpayers.”

To date, those court cases have been thwarted by EPB. However, it is a different story in state legislatures. Once again abandoning the business lobby’s typical call for less government intervention, telecom firms have successfully pushed 20 states to pass laws limiting the reach of community-owned utilities like EPB.

That’s where Washington comes in. With Census figures showing more than 1 in 5 Tennessee residents having no Internet connection, EPB is now proposing to offer its ultra-fast services to new communities. But it needs the Federal Communications Commission to preempt the Tennessee statute prohibiting the utility from competing with private telecom companies outside its current market.

For EPB, the good news is that FCC Chairman Tom Wheeler has repeatedly pledged that in the name of competition and broadband access, he will support preempting state laws like Tennessee’s. However, in a capital run by money, EPB may still be politically overpowered. After all, as a community-owned utility in a midsized city, EPB does not have the lobbyists and campaign cash to match those of behemoths like Comcast and AT&T. What the utility does have is a solid track record and a pro-consumer, pro-competition argument.

The question is: Will that be enough to prevent Wheeler from backing down or being blocked by Congress? The future of the Internet may be at stake in the answer.

David Sirota is a staff writer at PandoDaily and the best-selling author of the books “Hostile Takeover,” “The Uprising” and “Back to Our Future.” Email him at ds@davidsirota.com, follow him on Twitter @davidsirota or visit his website at www.davidsirota.com.

The Internet Archive’s Quest for All Knowledge

Does the Internet Make You Dumber?