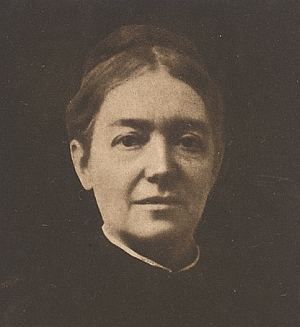 Mary Corinna Putnam (August 31, 1842 – June 10, 1906) was an American physician, writer, and suffragist. She crusaded for the integration of clinical and laboratory studies. Disparaging anecdotal evidence and traditional approaches, she demanded scientific research on every question of the day. As a leading feminist, she rejected the traditional wisdom about the weaknesses of women. Her work with reformers and suffragists made her a leading spokesman for women’s health during the Progressive Era. (Wikipedia)

During her career, Jacobi published nine books and over 120 medical articles. In her paper, “The Question of Rest for Women During Menstruation,” she refuted the question of women’s physical limitations in response to Dr. Edward H. Clarke’s earlier publication, “Sex in Education; or, A Fair Chance for the Girls” (1875), which questioned the expanded role of women in society and the professions. Dr. Jacobi provided tables, statistics, and sphygmographic tracings of pulse rate, force, and variations to illustrate the stability of a woman’s health, strength, and agility throughout her monthly cycle. Despite great controversy surrounding the report, the paper was awarded Harvard Medical School’s esteemed Boylston Medical Prize in 1876.

Dr. Jacobi was an active participant in, and supporter of, the suffragist movement. She actively supported her female students as a medical educator and, through her affiliation with Woman’s Medical College in Pennsylvania, as an alumna and instructor. One of Dr. Jacobi’s last scientific works was a detailed clinical account of her own meningeal tumor, from which she died in 1906. (Harvard University)