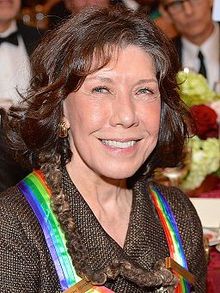 Tomlin at the 2014 Kennedy Center Honors

Tomlin began her career as a stand-up comedian, and performing Off-Broadway during the 1960s. Her breakout role was performing as a cast member on the variety show Rowan & Martin’s Laugh-In from 1970 until 1973. She currently stars on the Netflix series Grace and Frankie as Frankie Bergstein. Her performance as Frankie garnered her a nomination for the Primetime Emmy Award in 2015.

In 1974 Tomlin was cast by Robert Altman in her first film; her performance as Linnea Reese in Nashville won her several awards and nominations for the Golden Globe and Academy Award for Best Supporting Actress.

Her signature role was written by her wife, Jane Wagner, in a show titled The Search for Signs of Intelligent Life in the Universe which opened on Broadway in 1985 and won Tomlin the Tony Award for Best Lead Actress in a Play. She is also known as the voice of Mrs. Frizzle on the children’s series The Magic School Bus. She won her first Emmy Awards in 1974 for writing and producing her own television special, Lily. Tomlin won a Grammy Award for her 1972 comedy album This Is a Recording. In 2014 she was given Kennedy Center Honors.