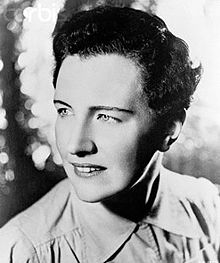 Mary Renault (4 September 1905 – 13 December 1983), born Eileen Mary Challans, was an English writer best known for her historical novels set in Ancient Greece. In addition to vivid fictional portrayals of Theseus, Socrates, Plato and Alexander the Great, she wrote a non-fiction biography of Alexander.
…

Themes
In South Africa Renault was able to write forthrightly about homosexual relationships for the first time. Her sympathetic treatment of love between men won her a wide gay readership, but it also led to rumours that Renault was really a gay man writing under a female pseudonym. Renault found these rumours amusing but also sought to distance herself from being labelled a “gay writer”.

Her historical novels are all set in ancient Greece. They include a pair of novels about the mythological hero Theseus and a trilogy about the career of Alexander the Great. In a sense, The Charioteer (1953), the story of two young gay servicemen in the 1940s who try to model their relationship on the ideals expressed in Plato’s Phaedrus and Symposium, is a warm-up for Renault’s historical novels. By turning away from the 20th century and focusing on stories about male lovers in the warrior societies of ancient Greece, Renault no longer had to deal with homosexuality and anti-gay prejudice as social “problems”. Instead she was free to focus on larger ethical and philosophical concerns while examining the nature of love and leadership. The Charioteer could not be published in the U.S. until 1959, after the success of The Last of the Wine proved that American readers and critics would accept a serious gay love story.

Although not a classicist by training, Renault was admired in her day for her scrupulous recreations of the ancient Greek world. Some of the history presented in her fiction and in her non-fiction work, The Nature of Alexander has been called into question, however. Her novels about Theseus rely on the controversial theories of Robert Graves, and her portrait of Alexander has been criticized as uncritical and romanticized. According to Kevin Kopelson, professor of English at the University of Iowa, Renault “mischaracterize[s] pederastic relationships as heroic.” Defying centuries of admiration for Demosthenes as a great orator, Renault portrayed him as a cruel, corrupt and cowardly demagogue. Renault defended her interpretation of the available sources in author’s notes attached to her books.

Though Renault appreciated her gay following, she was uncomfortable with the “gay pride” movement that emerged in the 1970s after the Stonewall riots. Like Laurie Odell, the protagonist of The Charioteer, she was suspicious of identifying oneself primarily by one’s sexual orientation. Late in her life she expressed hostility to the gay rights movement, troubling some of her fans. David Sweetman remarks in his biography of Renault that her novels generally portray mothers in a poor light and that, particularly in her later novels, this is extended to women in general. Her generally negative depiction of women has also been noted by the critic Carolyn Heilbrun.

Legacy
The powerful impact Renault’s work may have had on many readers, especially emerging young gay men, is suggested in a moving personal memoir by author and critic Daniel Mendelsohn.