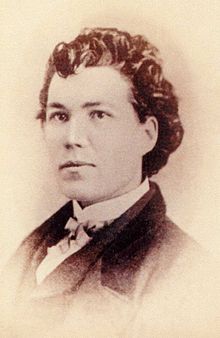 Sarah Emma Edmonds (December 1841[1] – September 5, 1898 ), was a Canadian-born woman who is known for serving as a man with the Union Army during the American Civil War. A master of disguise, Edmonds exploits were described in the bestselling Nurse and Spy in the Union Army. In 1992, she was inducted into the Michigan Women’s Hall of Fame.

Little is known about Edmonds’ early life, but it is said that to escape an arranged marriage she ran away from home at age 15 disguised as a boy. When the Civil War began, she was in Flint Michigan, calling herself Frank Thompson and selling Bibles. “Frank” joined Company F of the 2nd Michigan Infantry and fought in several battles, including Blackburn’s Ford and the first Bull Run. At the Battle of Fredericksburg she served as an aide to Colonel Orlando M. Poe, and she did occasional intelligence work in Confederate territory “disguised” as a woman. In April 1863, for some unknown reason, she left the army, took the name Sarah Edmonds, and worked as a nurse. Two years later she wrote an account of her adventures, Nurse and Spy in the Union Army, which was extremely popular because of its mixture of violence and sentimentality. (Remember the Ladies, Kirstin Olsen, 1998)