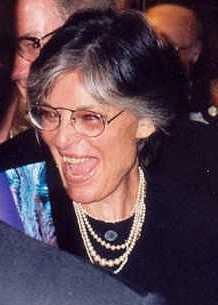 Anna Maria Louisa Italiano (September 17, 1931 – June 6, 2005), known professionally as Anne Bancroft, was an American actress associated with the Method acting school, which she had studied under Lee Strasberg. Respected for her acting prowess and versatility, Bancroft was acknowledged for her work in film, theatre and television. She won one Academy Award, three BAFTA Awards, two Golden Globes, two Tony Awards and two Emmy Awards, and several other awards and nominations.

After her film debut in Don’t Bother to Knock (1952) and a string of supporting film roles during the 1950s, she won an Academy Award for Best Actress for her lead role in The Miracle Worker (1962) as the teacher of teenage Helen Keller, reprising her role in the Broadway stage play. She won both an Oscar for her work in the film, and a Tony for the same role in the play. On Broadway in 1965, she played a medieval nun obsessed with a priest (Jason Robards) in John Whiting’s play The Devils, based on the Aldous Huxley novel The Devils of Loudun. She was perhaps best known as the seductress, Mrs. Robinson, in The Graduate (1967), a role that she later stated had come to overshadow her other work.

Bancroft received several other Oscar nominations and continued in lead roles until the late 1980s. She played a ballet dancer in The Turning Point (1977), and in Agnes of God she played the mother superior of a convent who clashes with a psychiatrist played by Jane Fonda over dealings with a troubled young novice nun played by Meg Tilly. In 1987, she starred with Anthony Hopkins in 84 Charing Cross Road. She appeared in several movies directed or produced by her second husband, comedian Mel Brooks, including The Elephant Man (a straight drama produced by Brooks) and the comedies To Be or Not to Be, and in a smaller role Dracula: Dead and Loving It.

In the 1990s she returned to supporting roles in films, but continued to play lead roles in television films. She received Emmy and Screen Actors Guild Award nominations, for The Roman Spring of Mrs. Stone (2003), as well as an Emmy nomination for 2001’s Haven.

While filming Spanglish with Adam Sandler, Bancroft was forced to drop out of the project because of illness. She died of uterine cancer on June 6, 2005, at Mt. Sinai Hospital in New York. She was survived by her husband, their son, Max, and their grandson. (Biography.com)