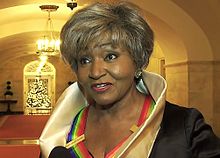 Grace Melzia Bumbry (born January 4, 1937), an American opera singer, is considered one of the leading mezzo-sopranos of her generation, as well as a major soprano for many years. She was a member of a pioneering generation of singers who followed Marian Anderson (including Leontyne Price, Martina Arroyo, Shirley Verrett and Reri Grist) in the world of classical music and paved the way for future African-American opera and classical singers. Bumbry’s voice was rich and sizable, possessing a wide range, and was capable of producing a very distinctive plangent tone. In her prime, she also possessed good agility and bel canto technique (see for example her renditions of the ‘Veil Song’ from Verdi’s Don Carlo in the 1970s and 1980s, as well as her Ernani from the Chicago Lyric Opera in 1984). She was particularly noted for her fiery temperament and dramatic intensity on stage. More recently, she has also become known as a recitalist and interpreter of lieder, and as a teacher. From the late 1980s on, she concentrated her career in Europe, rather than in the US. A long-time resident of Switzerland, she now makes her home in Salzburg, Austria.

As a dramatic soprano she sang Salome in “Salome”, Santuzza in “Cavalleria Rusticana”, Abigaille in “Nabucco”, Medea in “Medea”, La Vestale in “La Vestale”, Jenufa in “Jenufa”, Giocando in “La Gioconda”, Ariane in “Ariane et Barbe-bleu”, Leonora in “Il Trovatore” and “La Forza del Destino”, Tosca in “Tosca”, Turandot in “Turandot” and Cassandra in “Les Troyens” with the Paris Opera in its full 5 and ½ hour presentation. She gave another tour de force performance at Covent Garden when she sang Norma and Adalgisa in the same production of Norma within a period of two weeks.

From the beginning, Grace Bumbry was an acclaimed recitalist. Her recitals merited the exclamation “authentic and keeping with tradition”, a standard and style of singing she learned from her famous teacher, Lotte Lehmann, a great Lieder exponent. As one critic wrote, “hearing Bumbry sing the most intimate songs in major recital halls and then on another evening, hearing the “Bumbry thrust”, in her operatic roles, as only she could do, kept this very important artist on the lips of all who witnessed her.”
After Bumbry gave up mezzo soprano roles, with the exception of Princess Eboli, she was often asked how she reconciles mixing the repertoire of the two vocal categories.

Her answer, “As long as I have the ability from nature, I simply do what many others in the 19th century did before me. I don’t think singers like Grisi, Pasta, Malibran and some others ever worried about belonging to a specific category”, has not changed. Ms. Bumbry has been the subject of so many debates in the opera world that there are clubs of opera lovers all over that emulate her very essence with their praise, honour and sometimes funny reports of ‘Bumbry moments.’

Grace-Melzia is especially proud of being named a Goodwill Ambassador to “UNESCO”, the recipient of The American Guild of Musical Artists´ first “Lawrence Tibbett Award”, France’s “L’Officier des Arts et Lettres”, as well as the “Commandeur des Arts et Lettres” and Italy’s “Premio Giuseppe Verdi” for her performances and contribution to Italian opera. She went on to receive the “Bellini Award” for her “Norma” and the “Puccini Award” for her “Tosca”. She is recipient of 4 Honorary Doctorates as well as the Austrian Kammersänger title.
Making headlines all over the world, she helped to define the word DIVA with her art and style. Of course, let us not forget the international jetsetter, Grace, who became the owner of the second ever made Lamborghini, furs, designer gowns made by Yves Saint Laurent, Heinz Riva and Bill Blass, and jewels of the most exquisite quality. (GraceBumbry.com)