Jeane L. Dixon (January 5, 1904 – January 25, 1997) was one of the best-known American self-proclaimed psychics and astrologers of the 20th century, due to her syndicated newspaper astrology column, some well-publicized predictions, and a best-selling biography. 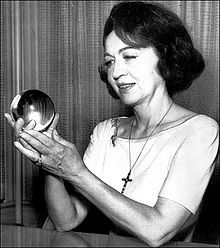 Dixon reportedly predicted the assassination of President John F. Kennedy. In the May 13, 1956, issue of Parade Magazine she wrote that the 1960 presidential election would be “dominated by labor and won by a Democrat” who would then go on to “[B]e assassinated or die in office though not necessarily in his first term.” She later admitted, “During the 1960 election, I saw Richard Nixon as the winner”, and at the time made unequivocal predictions that JFK would fail to win the election.

Dixon was the author of seven books, including her autobiography, a horoscope book for dogs and an astrological cookbook. She gained public awareness through the biographical volume, A Gift of Prophecy: The Phenomenal Jeane Dixon, written by syndicated columnist Ruth Montgomery. Published in 1965, the book sold more than three million copies. She professed to be a devout Roman Catholic and she attributed her prophetic ability to God. Another million seller, My Life and Prophecies, was credited “as told to Rene Noorbergen”, but Dixon was sued by Adele Fletcher, who claimed that her rejected manuscript was rewritten and published as that book. Fletcher was awarded five percent of the royalties by a jury.

President Richard Nixon followed her predictions through his secretary, Rose Mary Woods, and met with her in the Oval Office at least once, in 1971. The following year, her prediction of terrorist attacks in the United States in the wake of the Munich massacre spurred Nixon to set up a cabinet committee on counterterrorism. She was one of several astrologers who gave advice to Nancy Reagan.

John Allen Paulos, a mathematician at Temple University, coined the term ‘the Jeane Dixon effect’, which references a tendency to promote a few correct predictions while ignoring a larger number of incorrect predictions. Many of Dixon’s predictions proved false, such as her claims that a dispute over the offshore Chinese islands of Quemoy and Matsu would trigger the start of World War III in 1958, that American labor leader Walter Reuther would run for President of the United States in the 1964 presidential election, that the second child of Canadian Prime Minister Pierre Trudeau and his young wife Margaret would be a girl (it was a boy), and that the Russians would be the first to put men on the moon.

Dixon suffered a cardiac arrest and died at Sibley Memorial Hospital in Washington, D.C. on January 25, 1997. Many of her possessions ended up with Leo M. Bernstein, a Washington D.C. investor and banker, whose clients included Dixon. In 2002, he opened the Jeane Dixon Museum and Library in Strasburg, Virginia, to display what he owned. Bernstein died in 2008. In July 2009, the possessions, 500 boxes in all, were scheduled to be auctioned off.