Fanny Jackson Coppin (January 8, 1837 – January 21, 1913) was an African-American educator and missionary and a lifelong advocate for female higher education. 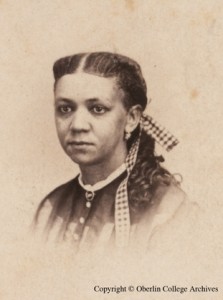 Born an American slave, Fanny Jackson’s freedom was purchased by her aunt at age 12. Fanny Jackson spent the rest of her youth working as a servant for author George Henry Calvert, studying at every opportunity. In 1860, she enrolled in Oberlin College in Ohio, the first college in the United States to accept both black and female students. She writes in her autobiography:

“The faculty did not forbid a woman to take the gentleman’s course, but they did not advise it. There was plenty of Latin and Greek in it, and as much mathematics as one could shoulder. Now, I took a long breath and prepared for a delightful contest. All went smoothly until I was in the junior year in College. Then, one day, the Faculty sent for me—ominous request—and I was not slow in obeying it. It was a custom in Oberlin that forty students from the junior and senior classes were employed to teach the preparatory classes. As it was now time for the juniors to begin their work, the Faculty informed me that it was their purpose to give me a class, but I was to distinctly understand that if the pupils rebelled against my teaching, they did not intend to force it. Fortunately for my training at the normal school, and my own dear love of teaching, tho there was a little surprise on the faces of some when they came into the class, and saw the teacher, there were no signs of rebellion. The class went on increasing in numbers until it had to be divided, and I was given both divisions. One of the divisions ran up again, but the Faculty decided that I had as much as I could do, and it would not allow me to take any more work.”

During her years as a student at Oberlin College, she taught an evening course for free African Americans in reading and writing, and she graduated with a Bachelor’s degree in 1865. 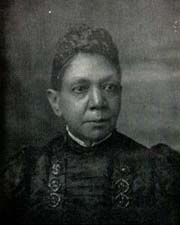 In 1865, Fanny Jackson accepted a position at Philadelphia’s Institute for Colored Youth (now Cheyney University of Pennsylvania). She served as the principal of the Ladies Department and taught Greek, Latin, and Mathematics. In 1869, Fanny Jackson was appointed as the principal of the Institute after the departure of Ebenezer Bassett, becoming the first African American woman to become a school principal. In her 37 years at the Institute, Fanny Jackson was responsible for vast educational improvements in Philadelphia. During her years as principal, she was promoted by the board of education to superintendent. She was the first African American superintendent of a school district in the United States, but soon went back to the being a school principal.

On December 21, 1881, Fanny married Reverend Levi Jenkins Coppin, a minister of the African Methodist Episcopal Church pastor of Bethel AME Church Baltimore. Fanny Jackson Coppin started to become very involved with her husband’s missionary work, and in 1902 the couple went to South Africa and performed a variety of missionary work, including the founding of the Bethel Institute, a missionary school with self-help programs.

After almost a decade of missionary work, Fanny Jackson Coppin’s declining health forced her to return to Philadelphia, and she died on January 21, 1913. In 1926, a Baltimore teacher training school was named the Fanny Jackson Coppin Normal School (now Coppin State University).