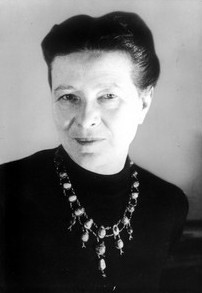 Simone Lucie Ernestine Marie Bertrand de Beauvoir, commonly known as Simone de Beauvoir; 9 January 1908 – 14 April 1986), was a French writer, intellectual, existentialist philosopher, political activist, feminist and social theorist. Though she did not consider herself a philosopher, she had a significant influence on both feminist existentialism and feminist theory. De Beauvoir wrote novels, essays, biographies, autobiography and monographs on philosophy, politics and social issues. She is known for her 1949 treatise The Second Sex, a detailed analysis of women’s oppression and a foundational tract of contemporary feminism; and for her novels, including She Came to Stay and The Mandarins. She is also known for her open relationship with French philosopher Jean-Paul Sartre.

Beauvoir’s method incorporated various political and ethical dimensions. In The Ethics of Ambiguity, she developed an existentialist ethics that condemned the “spirit of seriousness” in which people too readily identify with certain abstractions at the expense of individual freedom and responsibility. In The Second Sex, she produced an articulate attack on the fact that throughout history women have been relegated to a sphere of “immanence,” and the passive acceptance of roles assigned to them by society. In The Mandarins, she fictionalized the struggles of existents trapped in ambiguous social and personal relationships at the closing of World War II. The emphasis on freedom, responsibility, and ambiguity permeate all of her works and give voice to core themes of existentialist philosophy.

Her philosophical approach is notably diverse. Her influences include French philosophy from Descartes to Bergson, the phenomenology of Edmund Husserl and Martin Heidegger, the historical materialism of Karl Marx and Friedrich Engels, and the idealism of Immanuel Kant and G. W. F Hegel. In addition to her philosophical pursuits, de Beauvoir was also an accomplished literary figure, and her novel, The Mandarins, received the prestigious Prix Goncourt award in 1954. Her most famous and influential philosophical work, The Second Sex (1949), heralded a feminist revolution and remains to this day a central text in the investigation of women’s oppression and liberation. (Internet Encyclopedia of Philosophy).