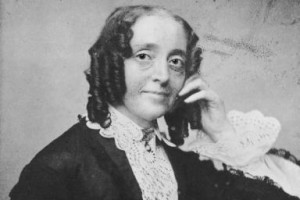 Ernestine Louise Rose (January 13, 1810 – August 4, 1892) was an atheist feminist, individualist feminist, and abolitionist. She was one of the major intellectual forces behind the women’s rights movement in nineteenth-century America.

She was born on January 13, 1810, in Piotrków Trybunalski, Congress Poland, as Ernestine Louise Polowsky. Her father was a wealthy rabbi and her mother the daughter of a wealthy businessman. At the age of five, Rose began to “question the justice of a God who would exact such hardships” as the frequent fasts that her father performed. As she grew older, she began to question her father more and more on religious matters, receiving only, “A young girl does not want to understand the object of her creed, but to accept and believe it.” in response. By the age of fourteen, she had completely rejected the idea of female inferiority and the religious texts that supported that idea.

When she was sixteen her mother died and her father, without her consent, betrothed her to a young Jew who was a friend of his. Rose, not wanting to enter a marriage with a man she neither chose nor loved, confronted him, professing her lack of affection towards him and begging for release. However, Rose was a woman from a rich family, and he denied her plea. Rose traveled to the secular civil court, where she pleaded her case herself. The courts ruled in her favor, not only freeing her from her betrothal, but ruling that she could retain the full inheritance she received from her mother. Although she decided to relinquish the fortune to her father, she gladly took her freedom from betrothal. She returned home only to discover that in her absence her father had remarried, to a sixteen-year-old girl. The tension that developed eventually forced her to leave home at the age of seventeen.

Rose then traveled to Berlin, where she found herself hampered by an anti-Semitic law that required all non-Prussian Jews to have a Prussian sponsor. She appealed directly to the king and was granted an exemption from the rule. Soon afterward, she developed a room deodorizer, which she sold to fund her travels.

She traveled to Belgium, the Netherlands, France, and finally England. Her arrival in England was less than smooth, however, as the ship in which she was sailing wrecked. Although Rose did make it to England safely, all her possessions had been destroyed, and she found herself destitute. In order to support herself, she sought work as a teacher in the languages of German and Hebrew and she continued to sell her room deodorizers. While in England, she met Robert Owen, a Utopian socialist, who was so impressed by her that he invited her to speak in a large hall for radical speakers. In spite of her limited knowledge of English, the audience was so impressed that from then on her appearances were regular. She and Owen were close friends, and she even helped him to found the Association of All Classes of All Nations, a group that espoused human rights for all people of all nations, sexes, races and classes. During her time there she also met William Ella Rose, a Christian jeweler and silversmith, an Englishman and an “Owenite”. They were soon married by a civil magistrate, and both made it plain that they considered the marriage a civil contract rather than a religious one.

In May 1836 the Roses emigrated to the United States, where they later became naturalized citizens and settled in a cozy house in New York city in 1837. The Roses soon opened a small “Fancy and Perfumery” store in their home, where Rose sold her perfumed toilet water and William ran a silversmith shop. 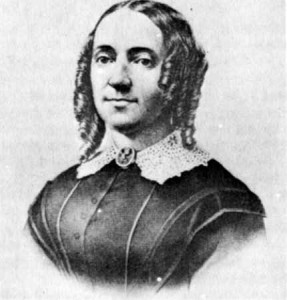 Rose soon began to give lectures on the subjects that most interested her, joining the “Society for Moral Philanthropists” and traveling to different states to espouse her causes of the abolition of slavery, religious tolerance, public education and equality for women. Her lectures were met with controversy. When she was in the South to speak out against slavery, one slaveholder told her he would have “tarred and feathered her if she had been a man”. When, in 1855, she was invited to deliver an anti-slavery lecture in Bangor, Maine, a local newspaper called her “a female Atheist… a thousand times below a prostitute.” When Rose responded to the slur in a letter to the competing paper, she sparked off a town feud that created such publicity that, by the time she arrived, everyone in town was eager to hear her. Her most ill-received lecture was likely in Charleston, West Virginia, where her lecture on the evils of slavery was met with such vehement opposition and outrage that she was forced to exercise considerable influence to even get out of the city safely.

In the 1840s and 1850s, Rose joined the “pantheon of great American women”, a group that included such influential women as Elizabeth Cady Stanton, Susan B. Anthony, Lucretia Mott, Paulina Kellogg Wright Davis and Sojourner Truth and fought for women’s rights and abolition.

In the winter of 1836, Judge Thomas Hertell submitted a married women’s property act to the legislature of New York city to investigate methods of improving the civil and property rights of married women, and to allow them to hold real estate in their own name. When Rose heard of this resolution, she drew up a petition and began to solicit names in support of it. In 1838, this petition was sent to the state legislature in spite of it only having five names. This was the first petition ever introduced in favor of rights for women. During the following years, she increased both the number of petitions and the number of signatures. In 1849, these rights were finally won.

Rose was elected president of the National Women’s Rights Convention in October, 1854, in spite of objections that she was an atheist. Her election was heavily supported by Susan B. Anthony, who declared that, “every religion – or none – should have an equal right on the platform”.

Although she never seemed to attach any importance to her Jewish background, in 1863 Rose had a published debate with Horace Seaver, the abolitionist editor of the Boston Investigator, whom she accused of being anti-Semitic.

In her later years, after a six month trip to Europe, she attempted to stay away from platforms and controversy. Within 6 months, she made the closing address at the nationwide Women’s Rights Convention. However, her health once again took a downward turn, and on June 8, 1869, she and her husband set sail for England. Susan B. Anthony arranged a farewell party for them, and the couple received many gifts from friends and admirers, including a substantial amount of money.

After 1873, her health improved, and she began to advocate women’s suffrage in England, even attending the Conference of the Woman’s Suffrage movement in London and speaking in Edinburgh, Scotland at a large public meeting in favor of woman’s suffrage. She died in England in 1892.