Sofia Vasilyevna Kovalevskaya (15 January [O.S. 3 January] 1850 – 10 February [O.S. 29 January] 1891), was the first major Russian female mathematician, responsible for important original contributions to analysis, differential equations and mechanics, and the first woman appointed to a full professorship in Northern Europe. There are some alternative transliterations of her name. She herself used Sophie Kowalevski (or occasionally Kowalevsky), for her academic publications. After moving to Sweden, she called herself Sonya. [Wikipedia] 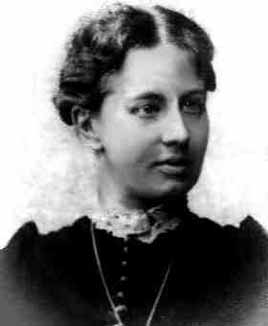 By the time she was 18 years old, Kovalevskaya had studied physics, geometry, algebra, trigonometry, calculus and biology. This was an exceptional accomplishment for any 19th century woman, especially from Russia. She would die at the age of 41 from influenza and pneumonia.

In Russia at that time, there was no opportunity for women to continue their education, or to travel, without the permission of her father or her husband. Kovalevskaya chose to marry rather than go to her father, influenced by her recent conversion to radicalism, especially to nihilism, which held that the sexes were equal and that women, as well as men, should educate themselves and serve society. In radical circles it was common to make marriages of convenience so as to travel abroad and escape parental supervision. Seldom consummated, after the ceremony bride and groom often never saw each other again.

Kovalevskaya made such a marriage to paleontologist Vladamir Kovalevskaya, but she paid for her freedom with 15 years of misery, as her husband was irresponsible, unreliable and mentally unstable. He refused to leave her alone, and until his suicide in 1883 he was a constant burden. To compensate, she developed new interests and obtained an introduction to University of Göttingen professor Karl Weierstrass. He gave her some difficult problems just to get rid of her, but when she returned with the problems correctly solved, they began a lifelong friendship.

After writing a novel and an autobiographical novel, The Sisters Rajevsky, she took a job as a lecturer at the University of Stockholm. Some Swedes welcomed her graciously, the playwright Strindberg stated, “A female professor of mathematics is a pernicious and unpleasant phenomenon—even, one might say, a monstrosity.” Nonetheless, she became well known for the Caucy-Kovalevskaya Theorem of differential equations and for her essay On the Rotation of a Solid Body About a Fixed Point, which won the French Academy’s Prix Bordin.

She was made a tenured professor in 1889, and in the same year Russia’s Imperial Academy of Sciences changed its rules to allow her to join its ranks. She was admired throughout Europe. Nonetheless, two years before her death, she was banned from teaching in her native land—because she was a woman.