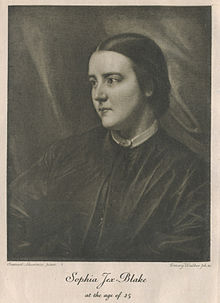 Sophia Louisa Jex-Blake (21 January 1840 – 7 January 1912) was an English physician, teacher and feminist. She led the campaign to secure women access to a University education when she and six other women, collectively known as the Edinburgh Seven, began studying medicine at the University of Edinburgh in 1869. She was the first practising female doctor in Scotland, and one of the first in the wider United Kingdom of Great Britain and Ireland; a leading campaigner for medical education for women and was involved in founding two medical schools for women, in London (at a time when no other medical schools were training women).

Early life
Sophia Jex-Blake was born at 3 Croft Place Hastings, England on 21 January 1840, daughter of retired lawyer Thomas Jex-Blake, a proctor of Doctors’ Commons, and Mary Jex-Blake née Cubitt. Her brother was Thomas Jex-Blake, future Dean of Wells Cathedral. She attended various private schools in southern England and in 1858 enrolled at Queen’s College, London, despite her parents’ objections. In 1859, while still a student, she was offered a post as mathematics tutor at the college where she stayed until 1861, living for some of that time with Octavia Hill’s family. She worked without pay: her family did not expect their daughter to earn a living, and indeed her father refused her permission to accept a salary.

Travels to the United States
The following month Sophia Jex-Blake travelled to the United States to learn more about women’s education. She visited various schools, was strongly influenced by developments in co-education in the USA and later published A Visit to Some American Schools and Colleges. At the New England Hospital for Women and Children in Boston she met one of the country’s pioneer female physicians, Lucy Sewell, who became an important and lifelong friend, and she worked there for a time as an assistant. This was a turning point for Jex-Blake as she realised, during this visit, that to become a doctor was her life’s vocation.

In 1867, along with Susan Dimock, a trainee from the New England Hospital, she wrote directly to the President and Fellows of Harvard University requesting admission to the University’s Medical School. They received their reply a month later, in a letter that stated ‘there is no provision for the education of women in any department of this university’. The following year she hoped to attend a new medical college being established by Elizabeth Blackwell in New York, but in the same year her father died and she returned to England to be with her mother.

‘A fair field and no favour’
In 1869, Jex-Blake’s essay “Medicine as a profession for women” appeared in a book edited by Josephine Butler: Women’s Work and Women’s Culture. In this she argued that natural instinct leads women to concern themselves with the care of the sick. However, with education of girls being restricted to domestic crafts, women generally could not compete with men as medical practitioners. However, she argued that there was no objective proof of women’s intellectual inferiority to men. She said that the matter could easily be tested by granting women ‘a fair field and no favor’—teaching them as men were taught and subjecting them to exactly the same examinations.

The campaign to secure a University education for women begins
Sophia Jex-Blake was determined to seek Medical training in the UK and due to Scotland’s already enlightened attitudes towards education, felt that if any University would allow women to study it would be a Scottish one.

She then advertised in The Scotsman and other national newspapers for more women to join her. A second application was submitted in the summer of 1869 on behalf of the group of five women initially (with two more joined later in the year to make the Edinburgh Seven). It requested matriculation and all that that implied—the right to attend all the classes and examinations required for a degree in medicine. This second application was approved by the University Court and the University of Edinburgh became the first British university to admit women.

Sophia Jex-Blake wrote in one of her letters to her great friend Lucy Sewell:

“It is a grand thing to enter the very first British University ever opened to women, isn’t it?”