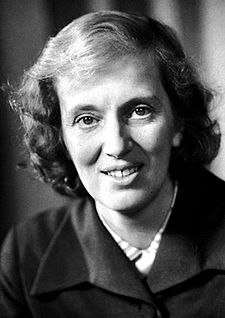 Dorothy Mary Hodgkin OM, FRS (12 May 1910 – 29 July 1994), née Crowfoot, was a British chemist, credited with the development of protein crystallography. She advanced the technique of X-ray crystallography, a method used to determine the three dimensional structures of biomolecules. Among her most influential discoveries are the confirmation of the structure of penicillin that Ernst Boris Chain had previously surmised, and then the structure of vitamin B12, for which she was awarded the Nobel Prize in Chemistry.

In 1969, after 35 years of work and five years after winning the Nobel Prize, Hodgkin was able to decipher the structure of insulin. X-ray crystallography became a widely used tool and was critical in later determining the structures of many biological molecules such as DNA where knowledge of structure is critical to an understanding of function. She is regarded as one of the pioneer scientists in the field of X-ray crystallography studies of biomolecules. [Wikipedia]

In 1965 she was the first woman since Florence Nightingale to be awarded the British Order of Merit, and in 1965 she was the third woman ever to win the Nobel prize for Chemistry. She used the Nobel money to sponsor a scholarship and to fun peace work and famine relief. [Remember the Ladies, Kirsten Olsen]