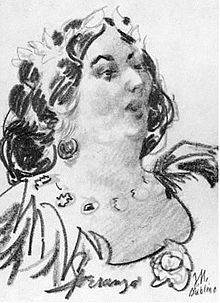 Jane Francesca Agnes, Lady Wilde (née Elgee; 27 December 1821 – 3 February 1896) was an Irish poet under the pen name “Speranza” and supporter of the nationalist movement; and had a special interest in Irish folktales, which she helped to gather. She married Sir William Wilde on 12 November 1851, and they had three children: William Charles Kingsbury Wilde (1852–1899), Oscar Fingal O’Flahertie Wills Wilde (1854–1900), and Isola Francesca Emily Wilde (1857–1867).

Activist
Jane was the last of the four children of Charles Elgee (1783–1824), a Wexford solicitor, and his wife Sarah (née Kingsbury, d. 1851). Her great-grandfather was an Italian who had come to Wexford in the 18th century. Lady Wilde, who was the niece of Charles Maturin, wrote for the Young Ireland movement of the 1840s, publishing poems in The Nation under the pseudonym of Speranza. Her works included pro-Irish independence and anti-British writing; she was sometimes known as “Speranza of the Nation.” Charles Gavan Duffy was the editor when “Speranza” wrote commentary calling for armed revolution in Ireland. The authorities at Dublin Castle shut down the paper and brought the editor to court. Duffy refused to name who had written the offending article. “Speranza” reputedly stood up in court and claimed responsibility for the article. The confession was ignored by the authorities. But in any event the newspaper was permanently shut down by the authorities.

She was an early advocate of women’s rights, and campaigned for better education for women. She invited the suffragist Millicent Fawcett to her home to speak on female liberty. She praised the passing of the Married Women’s Property Act of 1883, preventing women from having to enter marriage ‘as a bond slave, disenfranchised of all rights over her fortune.’

Scandals and death
William Wilde was knighted in January 1864, but the family celebrations were short-lived, for in the same year Sir William and Lady Wilde were at the centre of a sensational Dublin court case regarding a young woman called Mary Travers, the daughter of a colleague of Sir William’s, who claimed that he had seduced her and who then brought an action against Lady Wilde for libel. Mary Travers won the case and costs of £2,000 were awarded against Lady Wilde. Then, in 1867, their daughter Isola died of fever at the age of nine. In 1871 the two illegitimate daughters of Sir William were burned to death and in 1876 Sir William himself died. The family discovered that he was virtually bankrupt.

Lady Wilde left Dublin for London in 1879, where she joined her two sons, Willie, a journalist, and Oscar, who was making a name for himself in literary circles. She lived with her older son in poverty, supplementing their meagre income by writing for fashionable magazines and producing books based on the researches of her late husband into Irish folklore.

Lady Wilde contracted bronchitis in January 1896 and, dying, asked for permission to see Oscar, who was in prison. Her request was refused. It was claimed that her “fetch” appeared in Oscar’s prison cell as she died at her home, 146 Oakley Street, Chelsea, on 3 February 1896. Willie Wilde, her older son, was penniless, so Oscar paid for her funeral, which was held on 5 February at Kensal Green Cemetery in London. A headstone proved too expensive and she was buried anonymously in common ground. A monument to her, in the form of a Celtic cross, was erected at Kensal Green Cemetery by the Oscar Wilde Society in about 1999. (It is located at grid square 147 – Cambridge Avenue South (near Canalside), set back 20 metres from the curved path – opposite SQ.148.)

In 1911 the American-born writer Anna de Brémont, who claimed to have had a close friendship with Lady Wilde, published a memoir entitled Oscar Wilde and His Mother. Jane Wilde was the grandmother of Cyril and Vyvyan Holland, the sons of Oscar Wilde, and of Dorothy Wilde, the daughter of ‘Willie’.

‘Tis Easy to Be Green