Alice Malsenior Walker (born February 9, 1944) is an American author and activist. She wrote the critically acclaimed novel The Color Purple (1982) for which she won the National Book Award. 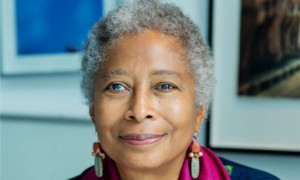 Walker’s first book of poetry was written while she was a senior at Sarah Lawrence. She took a brief sabbatical from writing while working in Mississippi in the civil rights movement. Walker resumed her writing career when she joined Ms. magazine as an editor before moving to northern California in the late 1970s. Her 1975 article “In Search of Zora Neale Hurston“, published in Ms. magazine, helped revive interest in the work of Zora Neale Hurston. Hurston inspired Walker’s writing and influenced her subject matter. In 1973, Walker and fellow Hurston scholar Charlotte D. Hunt discovered Hurston’s unmarked grave in Ft. Pierce, Florida. The women chipped in to buy a modest headstone for the gravesite.

In addition to her collected short stories and poetry, Walker’s first novel, The Third Life of Grange Copeland, was published in 1970. In 1976, Walker’s second novel, Meridian, was published. The novel dealt with activist workers in the South during the civil rights movement, and closely paralleled some of Walker’s own experiences.

In 1982, Walker published what has become her best-known work, The Color Purple. The novel follows a young troubled black woman fighting her way through not just racist white culture but patriarchal black culture as well. The book became a bestseller and was subsequently adapted into a critically acclaimed 1985 movie as well as a 2005 Broadway musical.

Walker’s website described her as having been “an activist all of her adult life” who believes “that learning to extend the range of our compassion is activity and work available to all. She is a staunch defender not only of human rights, but of the rights of all living beings. She is one of the world’s most prolific writers, yet tirelessly continues to travel the world to literally stand on the side of the poor, and the economically, spiritually and politically oppressed. She also stands, however, on the side of the revolutionaries, teachers and leaders who seek change and transformation of the world.”

Walker met Martin Luther King Jr. when she was a student at Spelman College in the early 1960s. Walker credits King for her decision to return to the American South as a civil rights activist for the Civil Rights Movement. She took part in the 1963 March on Washington. Later, she volunteered to register black voters in Georgia and Mississippi. On March 8, 2003, International Women’s Day, on the eve of the Iraq War, Walker was arrested with 26 others, including fellow authors Maxine Hong Kingston, Terry Tempest Williams, for crossing a police line during an anti-war rally outside the White House. In an interview with Democracy Now, Walker said, “I was with other women who believe that the women and children of Iraq are just as dear as the women and children in our families, and that, in fact, we are one family. And so it would have felt to me that we were going over to actually bomb ourselves.” Walker wrote about the experience in her essay, “We Are the Ones We Have Been Waiting For.”

In November 2008, Walker wrote “An Open Letter to Barack Obama” that was published online by The Root. Walker addressed the newly elected President as “Brother Obama” and wrote “Seeing you take your rightful place, based solely on your wisdom, stamina, and character, is a balm for the weary warriors of hope, previously only sung about.”

In January 2009, she was one of over 50 signatories of a letter protesting the Toronto International Film Festival’s “City to City” spotlight on Israeli filmmakers, condemning Israel as an “apartheid regime.”

In March 2009, Walker and 60 other female activists from the anti-war group Code Pink traveled to Gaza in response to the Gaza War. Their purpose was to deliver aid, to meet with NGOs and residents, and to persuade Israel and Egypt to open their borders with Gaza. She wrote about her meeting with an elderly Palestinian woman who upon accepting a gift from Walker said “May God protect you from the Jews.” Walker responded “It’s too late, I already married one.” referring to her former husband, a Jewish civil rights lawyer whom she had divorced in the 1970s. She planned to visit Gaza again in December 2009 to participate in the Gaza Freedom March.[28] On June 23, 2011, she announced plans to participate in an aid flotilla to Gaza that attempted to break Israel’s naval blockade.[29][30] Explaining her reasons, she cited concern for the children and that she felt that “elders” should bring “whatever understanding and wisdom we might have gained in our fairly long lifetimes, witnessing and being a part of struggles against oppression.”

Recent works are: Overcoming Speechlessness: A Poet Encounters the Horror in Rwanda, Eastern Congo and Palestine/Israel; Hard Times Require Furious Dancing; The World Has Changed: Conversations with Alice Walker; and The Chicken Chronicles: Sitting With the Angels Who Have Returned With My Memories, a Memoir. She also writes regularly on her blog site at www.alicewalkersgarden.com.

Two new books were presented in Spring of 2013: The Cushion in the Road: Meditation and Wandering as the Whole World Awakens to Being in Harm’s Way; and The World Will Follow Joy: Turning Madness into Flowers, poems.