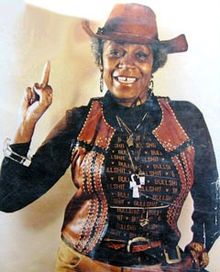 Kennedy, c. 1976 in a cowboy outfit she was noted for wearing

Kennedy was born in Kansas City to an African-American family. Her father Wiley Kennedy was a Pullman porter, and later had a taxi business. The second of her parents’ five daughters, she had a happy childhood, full of support from her parents, despite experiencing poverty in the Great Depression and racism in her mostly white neighborhood. The Klu Klux Klan being present in her neighborhood, Kennedy remembered a time in her neighborhood with her father having to be armed with a shotgun in order to ward off the Klan who was trying to drive her family out of the neighborhood. She later commented: “My parents gave us a fantastic sense of security and worth. By the time the bigots got around to telling us that we were nobody, we already knew we were somebody.”

Kennedy graduated at the top of her class at Lincoln High School, after which she worked many jobs including owning a hat shop and operating elevators. After the death of her mother Zella in 1942, Kennedy left Kansas for New York City, moving to an apartment in Harlem with her sister Grace. Of the move to New York she commented, “I really didn’t come here to go to school, but the schools were here, so I went.” In 1944 she began classes at Columbia University School of General Studies, majoring in pre-law and graduated in 1949. However, when she applied to the university’s law school, she was refused admission. In her autobiography Kennedy wrote,

Kennedy met with the dean and threatened to sue the school. They admitted her. She was the only black person among eight women in her class. In a 1946 sociology class at Columbia University Kennedy wrote a paper that analogized the discourses of race and sex. “Kennedy hoped that comparing “women’ and ‘Negroes’ would hasten the formation of alliances.”

Kennedy used Intersectionality as her approach to activism. Sherie Randolph, in her book Florynce “Flo” Kennedy: The Life of a Radical Black Feminist, quotes Flo saying: “My main message is that we have a pathologically, institutionally racist, sexist, classist society. And that niggerizing techniques that are used don’t only damage black people, but they also damage women, gay people, ex-prison inmates, prostitutes, children, old people, handicapped people, native Americans. And that if we can begin to analyze the pathology of oppression…we would learn a lot about how to deal with it.” Kennedy kept revisiting the same aim: “urging women to examine the sources of their oppression. She spoke of day to day acts of resistance that we can all take and hold her own arrests and political actions.” Kennedy summed up her protest strategy as “Mak[ing] white people nervous”]

Her activism began early. “Kennedy recalled being arrested for the first time in 1965 when she attempted to reach her home on East 48th Street and police refused to believe she lived in the neighborhood. From that point on, she focused her attention on combating racism and discrimination.”

According to Jason Chambers in his book Madison Avenue and the Color Line: African Americans in the Advertising Industry, “After graduating high school, [Kennedy] organized a successful boycott against a Coca-Cola bottler who refused to hire black truck drivers.”

Kennedy graduated from Columbia Law School in 1951. By 1954 she had opened her own office, doing matrimonial work, and some assigned criminal cases. She was a member of the Young Democrats. In 1956, she formed a legal partnership with the lawyer who had represented Billie Holiday in regards to drug charges. Kennedy then came to represent Holiday’s estate, and also that of Charlie Parker. She also worked as an activist for feminism and civil rights, and the cases she took on increasingly tended to be related to these causes. She was close friends with fellow Columbia law graduate Morton Birnbaum MD, whose concept of sanism she influenced during the 1960s.

Kennedy played a significant role in formulating the Miss America protest of 1968. The Miss America protest was used as a tool to demonstrate the “exploitation of women.” Randolph noted in her book, Florynce “Flo” Kennedy: The Life of a Black Feminist Radical, that the responsibility lay with Kennedy to recruit other black feminists to this protest. During the protest multiple women were arrested and Kennedy took on their cases as their attorney. 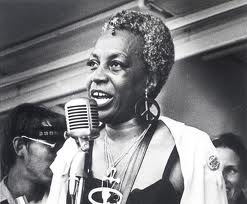 Photo from Quote Her

In the 1970s Kennedy traveled the lecture circuit with writer Gloria Steinem. If a man asked the pair if they were lesbians – a stereotype of feminists at the time – Kennedy would quote Ti-Grace Atkinson and answer, “Are you my alternative?” She was an early member of the National Organization for Women, but left them in 1970, dissatisfied with their approach to change. In 1971 she founded the Feminist Party, which nominated Shirley Chisholm for president. She also helped found the Women’s Political Caucus. Beginning in 1972 she served on the Advisory Board of the Westbeth Playwrights Feminist Collective, a New York City theatre group that produced plays on feminist issues. Kennedy’s “position on the role of black feminists was diplomatic without being evasive.”

Kennedy supported abortion rights and co-authored the book Abortion Rap with Diane Schulder. The phrase “If men could get pregnant, abortion would be a sacrament” is sometimes attributed to Kennedy, although Gloria Steinem attributed it to “an old Irish woman taxi driver in Boston” whom she said she and Kennedy met.[12] In 1972, Kennedy filed tax evasion charges with the Internal Revenue Service against the Catholic Church, saying that their campaign against abortion rights violated the separation of church and state.

You’ve got to rattle your cage door. You’ve got to let them know that you’re in there, and that you want out. Make noise. Cause trouble. You may not win right away, but you’ll sure have a lot more fun.

Sherie Randolph outlines in her article, Not to Rely Completely on the Courts, that Kennedy was one of the lawyers in the Abramowicz v. Lefkowitz case, the class action suit that wanted to repeal New York’s strict abortion laws. Randolph stated: “This case was one of the first to use women who suffered from illegal abortions as expert witnesses instead of relying on physicians. These tactics were eventually used in the Roe v. Wade case, in 1973, which overturned restrictive abortion laws.” Kennedy was a lawyer for the Women’s Health Collective and 350 plaintiffs in a similar lawsuit about abortion in New York.

Kennedy established the Media Workshop in 1966, “[using] these session to discuss strategies for challenging the media and to stress the importance of sharing tactical information across movement lines.” Kennedy and others would picket and lobby the media over their representation of Black people. She stated that she would lead boycotts of major advertisers if they didn’t feature black people in their ads. She attended all three Black Power conferences and represented H. Rap Brown, Assata Shakur and the Black Panthers. Kennedy also represented prominent radical feminist Valerie Solanas who was on trial for the attempted murder of Andy Warhol.

After the 1971 rebellion at Attica Prison in New York State arose as a result of human rights abuse, the issue of solidarity arose between the black power movement and the feminist movement, often forcing activists to choose between the two. Kennedy addressed the discord that feminists had against those who supported both the black power movement and feminism by saying: “We do not support Attica. We ARE Attica. We are Attica or we are nothing.” Beginning in 1972 she served on the Advisory Board of the Westbeth Playwrights Feminist Collective, a New York City theatre group that produced plays on feminist issues. In 1973 Kennedy co-founded with Margaret Sloan-Hunter the National Black Feminist Organization (NBFO), which also dealt with race and gender issues such as reproductive rights and sterilization campaigns that were aimed at specific races.

Kennedy often dressed in a cowboy hat and pink sunglasses. Once, to protest the lack of female bathrooms at Harvard, she led a mass urination on the grounds. When asked about this, she said:

I’m just a loud-mouthed middle-aged colored lady with a fused spine and three feet of intestines missing and a lot of people think I’m crazy. Maybe you do too, but I never stop to wonder why I’m not like other people. The mystery to me is why more people aren’t like me.

In 1974, People magazine wrote that she was “The biggest, loudest and, indisputably, the rudest mouth on the battleground.”

Acting
Kennedy acted in the films The Landlord (1970, adapted from Kristin Hunter’s 1966 novel), in which she played “Enid,” and the independent political drama Born In Flames (1983, directed by Lizzie Borden), in which she played “Zella.” Kennedy also acted in Who Says I Can’t Ride a Rainbow alongside Morgan Freeman (1971, directed by Edward Mann) and was seen on the TV series Some of My Best Friends are Men (1973).

Kennedy was one of many narrators in the second volume of a film entitled Come Back, Africa: The Films of Lionel Rogosin, which discussed African-American history as well as apartheid in South Africa. This film was created to “serve as a unique piece of African American oral history.”

Private life
In 1946, Kennedy wrote a monograph called “The Case Against Marriage”, which she later summarized in her autobiography:

…the idea being that marriage is a crock. Why should you lock yourself in the bathroom just because you have to go three times a day?

In 1957 Kennedy married science fiction author Charles Dye, who was previously married to fellow science fiction author Katherine MacLean. Dye suffered from alcoholism and died circa 1960, in his mid-thirties. Kennedy never remarried or had children. In 1986 on her 70th birthday, Kennedy had a birthday Gala at the New York City Playboy Club, sponsored by Christie Hefner—daughter and former CEO of Playboy Enterprises.

Awards and achievements
In 1997 Kennedy received a Lifetime Courageous Activist Award, and the following year was honored by Columbia University with their Owl Award for outstanding graduates. In 199 the City University of New York awarded her the Century Award.

Later life and death
Kennedy contributed the piece “Institutionalized oppression vs. the female” to the 1970 anthology Sisterhood is Powerful: An Anthology of Writings From The Women’s Liberation Movement, edited by Robin Morgan. In 1976, Kennedy wrote an autobiography, Color Me Flo: My Hard Life and Good Times (Englewood Cliffs, NJ: Prentice Hall), in which she wrote about her life and career. She also collaborated with William Francis Pepper on the book Sex Discrimination in Employment: An Analysis and Guide for Practitioner and Student.[ She died on December 21, 2000, at the age of 84.