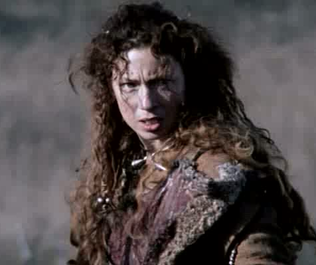 Boudica (alternative spellings: Boudicca, Boudicea, also known as Boadicea and in Welsh as Buddug (d. AD 60 or 61) was a queen of the British Celtic Iceni tribe who led an uprising against the occupying forces of the Roman Empire.

Boudica’s husband Prasutagus ruled as a nominally independent ally of Rome and left his kingdom jointly to his daughters and the Roman emperor in his will. However, when he died his will was ignored, and the kingdom was annexed. Boudica was flogged, her daughters raped, and Roman financiers called in their loans.

In AD 60 or 61, when the Roman governor Gaius Suetonius Paulinus was campaigning on the island of Anglesey off the northwest coast of Wales, Boudica led the Iceni, the Trinovantes, and others in revolt. They destroyed Camulodunum (modern Colchester), earlier the capital of the Trinovantes but at that time a colonia, a settlement for discharged Roman soldiers and site of a temple to the former Emperor Claudius. Upon hearing of the revolt, Suetonius hurried to Londinium (modern London), the 20-year-old commercial settlement that was the rebels’ next target.

The Romans, having concluded that they lacked sufficient numbers to defend the settlement, evacuated and abandoned Londinium. Boudica led 100,000 Iceni, Trinovantes, and others to fight Legio IX Hispana, and burned and destroyed Londinium, and Verulamium (modern-day St Albans).

An estimated 70,000–80,000 Romans and British were killed in the three cities by those led by Boudica. Suetonius, meanwhile, regrouped his forces in the West Midlands, and despite being heavily outnumbered defeated the Britons in the Battle of Watling Street.

The crisis caused Nero to consider withdrawing all Roman forces from Britain, but Suetonius’ eventual victory over Boudica confirmed Roman control of the province. Boudica then either killed herself, to avoid capture, or died of illness. The extant sources, Tacitus[6] and Cassius Dio, differ.

Interest in these events revived in the English Renaissance and led to Boudica’s fame in the Victorian era. Boudica has remained an important cultural symbol in the United Kingdom. However, the absence of native British literature during the early part of the first millennium means that knowledge of Boudica’s rebellion comes solely from the writings of the Romans.