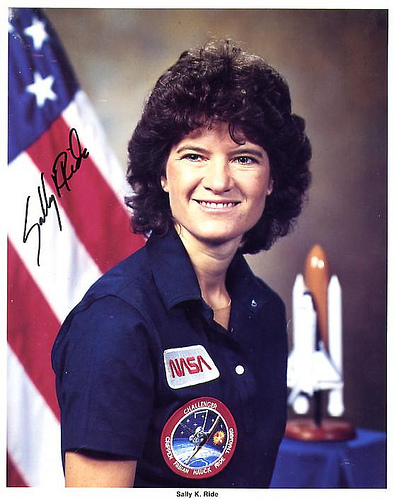 Sally Ride might be best known for being the first American woman in space, but her work on Earth might be her most enduring legacy.

Ride, who died in 2012, made history when she blasted into orbit on the Challenger spacecraft in 1983. Her job on board was to control a mechanical arm to send satellites into space. Back on Earth, she embraced her newfound identity as national role model. Setting a positive example would become her lifelong mission—one that is carried on by the Sally Ride Science foundation, which develops STEM curricula and other initiatives to get students thinking about space.

“I never went into physics or the astronaut corps to become a role model. But after my first flight, it became clear to me that I was one. And I began to understand the importance of that to people. Young girls need to see role models in whatever careers they may choose…. You can’t be what you can’t see,” Ride said a few weeks before she died.

After leaving NASA in 1987, she taught at Stanford University for a couple of years, then at the University of San Diego. In addition to teaching, she sought to help young people everywhere to dream space dreams, writing seven children’s books (several of which she cowrote with her partner, Tam O’Shaughnessy).

In 1995, Ride started a program that aimed to connect children to the wonders of space through photography. The Sally Ride EarthKAM allows middle school students around the world to harness the power of a camera aboard the International Space Station, snapping students’ choice of images around the globe. The Sally Ride EarthKAM is a permanent payload on the station, used on about four missions a year.

Ride’s passion continues to reach new generations with Sally Ride Science, founded with O’Shaughnessy in 2001. The foundation offers professional development courses for teachers, as well as lessons, events, and activities for kids.

“We have trained more than 20,000 teachers—10,000 through SRS Academy—and those teachers have reached more than 4 million students in thousands of schools across the country,” O’Shaughnessy said.

In February 2015, Sally Ride Science awarded its first Sally Ride–Deloitte Awards for Teaching Innovation in STEM. The first-place winner was Ryan York, an administrator in Tennessee and Mississippi with RePublic Schools (which runs charter schools in the South), who developed an open-source coding curriculum and education training program.

Ride was posthumously awarded the Presidential Medal of Freedom in 2013. O’Shaughnessy accepted the medal on Ride’s behalf. At the ceremony, President Obama remarked that Ride had fulfilled her mission of inspiring young people, saying, “Sally showed us that there are no limits to what we can achieve.”

This piece is part of our six-part series “Woman Scientist All-Stars,” presented with the film Interstellar. We are remembering women scientists who have helped to shape our world and who still inspire us to reach for the stars.

In Higher Education, a Focus on Technology