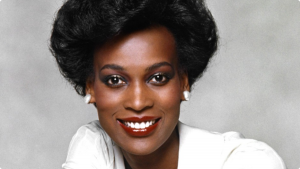 Sims was born in Oxford, Mississippi, the youngest of three daughters born to John and Elizabeth Sims. Her father (whom she never knew) reportedly worked as a porter, but Sims’ mother later described him “an absolute bum” and her parents divorced shortly after she was born. She was teased for her height of 5’10 at the age of 13. Mrs Sims later moved with her three daughters to Pittsburgh, Pennsylvania, where Naomi’s mother was forced to put her child into foster care. She attended Westinghouse High School. There due to her height, she was ostracized by many of her classmates. Sims credited her upbringing as a Catholic for helping to get her through adolescence.

Career
Sims began college after winning a scholarship to the Fashion Institute of Technology in New York City, while also taking night classes in psychology at New York University. Her early attempts to get modeling work through established agencies were frustrated by racial prejudice, with some agencies telling her that her skin was too dark. Her first career breakthrough came after she decided to sidestep the agencies and go directly to fashion photographers and Gosta Peterson, a photographer for The New York Times, agreed to photograph her for the cover of the paper’s August 1967 fashion supplement.

Despite this breakthrough, Sims still found it difficult to get work, so she approached Wilhelmina Cooper, a former model who was starting her own agency, saying that she would send out copies of the Times supplement to advertising agencies, attaching Cooper’s telephone number, and that Cooper’s agency would get a commission if Naomi received any work. Within a year Sims was earning US$1000 a week. The key breakthrough came when she was selected for a national television campaign for AT&T, wearing clothes by designer Bill Blass. In 1968 Sims told Ladies’ Home Journal:

“It helped me more than anything else because it showed my face. After it was aired, people wanted to find out about me and use me.” 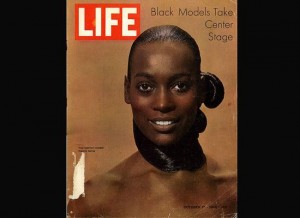 Success
She became one of the first successful black models while still in her teens, and achieved worldwide recognition from the late 1960s into the early 1970s, appearing on the covers of prestigious fashion and popular magazines. The New York Times wrote that (her) “appearance as the first black model on the cover of Ladies’ Home Journal in November 1968 was a consummate moment of the Black is Beautiful movement”. She also appeared on the cover of the October 17, 1969 issue of Life magazine. This was the first African-American model on the cover of the magazine. The images from the 1967 New York Times fashion magazine cover and the 1969 Life magazine cover were exhibited at the Metropolitan Museum of Art in an exhibition entitled The Model as Muse.

By 1972, Hollywood took an interest in her as a potential actress and offered her the title role in the movie Cleopatra Jones, but when Sims read the script, she was appalled by the racist portrayal of blacks in the movie and turned it down. Sims ultimately decided to go into the beauty business for herself. Sims retired from modeling in 1973 to start her own business which created a successful wig collection fashioned after the texture of straightened black hair. It eventually expanded “into a multimillion-dollar beauty empire and at least five books on modeling and beauty”.

Sims died of breast cancer on August 1, 2009, aged 61, in Newark, New Jersey. She is survived by her son, Bob Findlay, a granddaughter, and her elder sister, Betty Sims. Her eldest sister, Doris, died in 2008.