Olympe de Gouges (7 May 1748 – 3 November 1793), born Marie Gouze, was a French playwright and political activist whose feminist and abolitionist 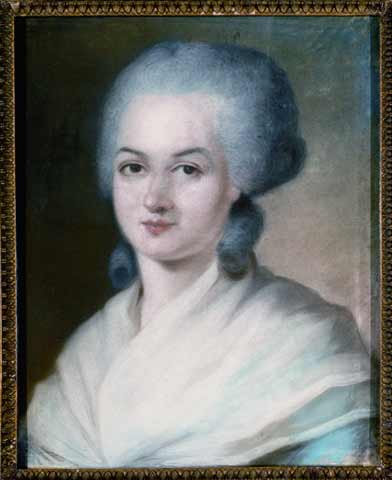 She began her career as a playwright in the early 1780s. As political tension rose in France, Olympe de Gouges became increasingly politically engaged. She became an outspoken advocate for improving the condition of slaves in the colonies as of 1788. At the same time, she began writing political pamphlets. Today she is perhaps best known as an early feminist who demanded that French women be given the same rights as French men. In her Declaration of the Rights of Woman and the Female Citizen (1791), she challenged the practice of male authority and the notion of male–female inequality. She was executed by guillotine during the Reign of Terror for attacking the regime of the Revolutionary government and for her close relation with the Girondists. 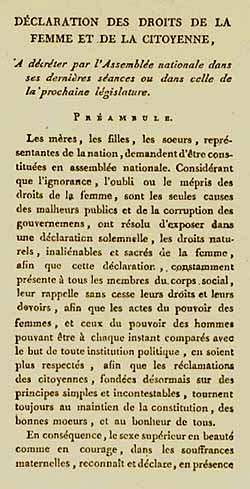 Olympe de Gouges wrote her famous Declaration of the Rights of Woman and the Female Citizen shortly after the French constitution of 1791 was created in the same year. She was alarmed that the constitution, which was to promote equal suffrage, did not address—nor even consider—women’s suffrage. The Constitution gave that right only to men. It also did not address key issues such as legal equality in marriage, the right of a woman to divorce her spouse if he abused her, or a woman’s right to property and custody of the children. So she created a document that was to be, in her opinion, the missing part of the Constitution of 1791, in which women would be given the equal rights they deserve. Throughout the document, it is apparent to the reader that Gouges had been influenced by the philosophy of the Enlightenment, whose thinkers, using “scientific reasoning”, critically examined and criticized the traditional morals and institutions of the day.

Gouges opens up her Declaration with a witty, and at times sarcastically bitter, introduction in which she asks men why they have chosen to subjugate women as a lesser sex. Her opening statement put rather bluntly: “Man, are you capable of being just? It is a woman who poses the question; you will not deprive her of that right at least.” The latter part of the statement shows her assertion that men have been absurdly depriving women of what should be common rights, so she sarcastically asks if men will find it necessary to take away even her right to question. Gouges begins her long argument by stating that in nature the sexes are forever mingled, cooperating in “harmonious togetherness.” There she uses Enlightenment logic: if in nature the equality and the cooperation of the two sexes achieves harmony, so should France achieve a happier and more stable society if women are given equality among men.

After her opening paragraph she proceeds to her declaration, which she asks be reviewed and decreed by the National Assembly in their next meeting. Her preamble explains that the reason for contemporary public misfortune and corrupt government is due to the oppression of women and their rights. The happiness and well-being of society would only be insured once the rights of women were equally important as those of men, especially in political institutions. In her document Gouges establishes the rights of women on the basis of their equality to men: that they are both human and capable of the same thoughts. Gouges also promotes the rights of women by emphasizing differences women have to men; however, differences that men ought to respect and take notice of. She argues that women are superior in beauty as well as in courage during childbirth. Addressing characteristics that set women apart from men, she adds what she probably thought was logical proof to her argument that men are not superior to women, and therefore, women are deserving at least of the same rights.

Her declaration bears the same outline and context as the Declaration of the Rights of Man and the Citizen, but Gouges either changes the word “man” to “woman” or adds “for both women and men.” In article II, the resemblance is exact to the previous declaration except that she adds “especially” before “the right to the resistance of oppression”, emphasizing again how important it is to her to end the oppression of women, and that the government should recognize this and take action.

She modifies article XI to say that a woman has the right to give her children the name of their father even if they be out of wedlock or the father may have left her. Gouges is passionate about this because she believed that she herself was an illegitimate child.

In her postscript, Gouges exhorts women to wake up and discover that they have these rights. She assures them that reason is on their side. Gouges asks, “What have women gained from the French Revolution?” She states that the answer is nothing, except to be marked with yet more disdain. She exclaims that women should no longer tolerate this, they should step up, take action, and demand the equal rights they deserve. Gouges calls the notion that women are lesser beings an “out-of-date” concept. In this, she shows strongly her Enlightenment perspective—to break from old, illogical traditions that are now archaic. She asserts that to revoke women’s right to partake in political life is also “out-of-date.”

Her last paragraph is titled a “Social Contract between Men and Women.” Taking a leaf from Rousseau’s book, the contract asks for communal cooperation. The wealth of a husband and wife should be distributed equally. Property should belong to both and to the children, whatever bed they come from. If they are divorced, their land should be divided equally. She called this the “marriage contract.” Gouges also proposed to allow a poor man’s wife to have her children adopted by a wealthy family – this would advance the community’s wealth and reduce disorder. Near the end of the contract, Gouges requests creation of a law to protect widows and girls from men who make false promises. This, perhaps, is the most important issue she deals with in France. In the postscript section of her document, Gouges describes the consequences for a woman who is left by an unfaithful husband, who is widowed with no fortune to her name, and of young, inexperienced girls who are seduced by men who leave them with no money and no title for their children. Gouges therefore demands a law that that will force an unfaithful or unscrupulous man to fulfill his obligations to such a woman, or to at least to pay a reimbursement equal to his wealth.

One of the last arguments in her document is directed to men who still see women as lesser beings: “the foolproof way to evaluate the soul of women is to join them to all the activities of man, if man persists against this, let him share his fortune with woman by the wisdom of the laws.” She challenges men that, if they wish, they may evaluate scientifically the consequences of joining man and woman in equal political rights.

She wrote numerous other works, and the olympedegouges.eu website provides translations of many of her pamphlets: “Denied a place in the powerful circles of her day she found her political voice by writing an astonishing number of pamphlets and posters that she freely disseminated around Paris. Her texts chart her battles against injustice and inequality, her belief that solidarity and cooperation should predominate, her hatred of dictatorships and the corrupting influence of power, her profound pacifism, her respect for humankind, her love of nature, and, of course, her desire that women be allowed a worthwhile role in society. She pleaded against slavery and the death penalty, dreamt of a more equal society and proposed intelligent taxation plans to enable wealth to be more fairly divided. She called for a form of welfare state, trial by jury and reasonable divorce laws to protect women and children from penury. Believing in the power of drama to encourage political change she wrote several plays that ingeniously highlight contemporary concerns.”

Remember the Ladies: Susan B. Anthony