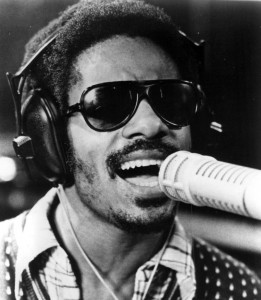 Stevland Hardaway Morris (born May 13, 1950, as Stevland Hardaway Judkins), known by his stage name Stevie Wonder, is an American musician, singer, songwriter, record producer, and multi-instrumentalist. A child prodigy, he became one of the most creative and loved musical performers of the late 20th century. Wonder signed with Motown’s Tamla label at the age of 11 and has continued to perform and record for Motown as of the early 2010s. He has been blind since shortly after birth.

Among Wonder’s works are singles such as “Superstition“, “Sir Duke“, “You Are the Sunshine of My Life” and “I Just Called to Say I Love You“; and albums such as Talking Book, Innervisions and Songs in the Key of Life. He has recorded more than 30 U.S. top ten hits and received 25 Grammy Awards, the most ever awarded to a male solo artist, and has sold over 100 million albums and singles, making him one of the top 60 best-selling music artists. Wonder is also noted for his work as an activist for political causes, including his 1980 campaign to make Martin Luther King, Jr.’s birthday a holiday in the United States. In 2009, Wonder was named a United Nations Messenger of Peace. In 2013, Billboard magazine released a list of the Hot 100 All-Time Top Artists to celebrate the U.S. singles chart’s 55th anniversary, with Wonder at number six. 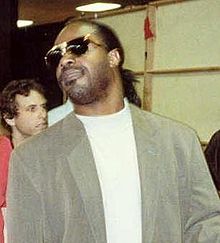 Stevie Wonder at the 1990 Grammy Awards

After 1987’s Characters album, Wonder continued to release new material, but at a slower pace. He recorded a soundtrack album for Spike Lee’s film Jungle Fever in 1991. From this album, singles and videos were released for “Gotta Have You” and “These Three Words“. The B-side to the “Gotta Have You” single was “Feeding Off The Love of the Land“, which was played during the end credits of the movie Jungle Fever but was not included on the soundtrack. A piano and vocal version of “Feeding Off The Love of the Land” was also released on the Nobody’s Child: Romanian Angel Appeal compilation. Conversation Peace and the live album Natural Wonder were released in the 1990s.

Among his other activities he played harmonica on one track for the 1994 tribute album KISS My Ass: Classic KISS Regrooved; sang at the 1996 Summer Olympics closing ceremony; collaborated in 1997 with Babyface on “How Come, How Long“, a song about domestic violence that was nominated for a Grammy award; and played harmonica on Sting’s 1999 “Brand New Day“. In December 1999, Wonder announced that he was interested in pursuing an intraocular retinal prosthesis to partially restore his sight.

Into the 21st century, Wonder continues to record and perform; though mainly occasional appearances and guest performances, he did do two tours, and released one album of new material, 2005’s A Time to Love. His key appearances include performing at the opening ceremony of the 2002 Winter Paralympics in Salt Lake City, the 2005 Live 8 concert in Philadelphia, the pre-game show for Super Bowl XL in 2006, the Obama Inaugural Celebration in 2009, and the opening ceremony of the 2011 Special Olympics World Summer Games in Athens, Greece.

Wonder’s first new album in ten years, A Time to Love, was released in October 2005 to lower sales than previous albums, and lukewarm reviews—most reviewers appearing frustrated at the end of the long delay to get an album that mainly copied the style of Wonder’s “classic period” without doing anything new. The first single, “So What the Fuss“, was released in April. A second single, “From the Bottom of My Heart“, was a hit on adult-contemporary R&B radio. The album also featured a duet with India.Arie on the title track “A Time to Love“. By June 2008, Wonder was working on two projects simultaneously: a new album called The Gospel Inspired By Lula, which will deal with the various spiritual and cultural crises facing the world, and Through The Eyes Of Wonder, an album he has described as a performance piece that will reflect his experience as a blind man. Wonder was also keeping the door open for a collaboration with Tony Bennett and Quincy Jones concerning a rumored jazz album. If Wonder were to join forces with Bennett, it would not be for the first time; Their rendition of “For Once in My Life” earned them a Grammy for best pop collaboration with vocals in 2006. Wonder’s harmonica playing can be heard on the 2009 Grammy-nominated “Never Give You Up“, featuring CJ Hilton and Raphael Saadiq.

In October 2013, Wonder revealed that he had been recording new material for two albums, When the World Began and Ten Billion Hearts, in collaboration with producer David Foster, the albums to be released in 2014. He is featured on two tracks on Mark Ronson’s new album Uptown Special.

Wonder did a 13-date tour of North America in 2007, starting in San Diego on August 23; this was his first U.S. tour in over ten years. On September 8, 2008, Wonder started the European leg of his Wonder Summer’s Night Tour, the first time he had toured Europe in over a decade. His opening show was at the National Indoor Arena in Birmingham. During the tour, Wonder played eight UK gigs; four at the O2 Arena in London, two in Birmingham and two at the M.E.N. Arena in Manchester. Wonder’s other stops in the tour’s European leg also found him performing in the Netherlands (Rotterdam), Sweden (Stockholm), Germany (Cologne, Mannheim and Munich), Norway (Hamar), France (Paris), Italy (Milan) and Denmark (Aalborg). Wonder also toured Australia (Perth, Adelaide, Melbourne, Sydney and Brisbane) and New Zealand (Christchurch, Auckland and New Plymouth) in October and November.[68] His 2010 tour included a two-hour set at the Bonnaroo Music Festival in Manchester, Tennessee, a stop at London’s “Hard Rock Calling” in Hyde Park, and appearances at England’s Glastonbury Festival, Rotterdam’s North Sea Jazz Festival, and a concert in Bergen, Norway and a concert in Dublin, Ireland at the O2 Arena on June 24. 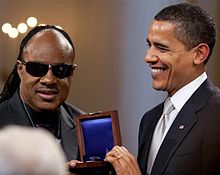 Barack Obama presents Wonder with the Gershwin Prize in 2009.

In 2000, Wonder contributed two new songs to the soundtrack for Spike Lee’s Bamboozled album (“Misrepresented People” and “Some Years Ago”). In June 2006, Wonder made a guest appearance on Busta Rhymes’ album, The Big Bang on the track “Been through the Storm“. He sings the refrain and plays the piano on the Dr. Dre and Sha Money XL-produced track. He appeared again on the last track of Snoop Dogg’s album Tha Blue Carpet Treatment, “Conversations“. The song is a remake of “Have a Talk with God” from Songs in the Key of Life. In 2006, Wonder staged a duet with Andrea Bocelli on the latter’s album Amore, offering harmonica and additional vocals on “Canzoni Stonate“. Wonder also performed at Washington, D.C.’s 2006 “A Capitol Fourth” celebration. Wonder appeared on singer Celine Dion’s studio album Loved Me Back to Life performing a cover of his 1985 song “Overjoyed“. The album was released in October 2013.

On February 23, 2009, Wonder became the second recipient of the Library of Congress’s Gershwin Prize for pop music, honored by president Barack Obama at the White House. On March 6, 2010, Wonder was appointed a Commander of the Order of Arts and Letters by French Culture Minister Frédéric Mitterrand. Wonder had been due to be invested with this honor in 1981, but scheduling problems prevented this from happening. A lifetime achievement award was also given to Wonder on the same day, at France’s biggest music awards. In June 2011, the Apollo Theater inducted Wonder into the Apollo Legends Hall of Fame.

What really makes you happy?