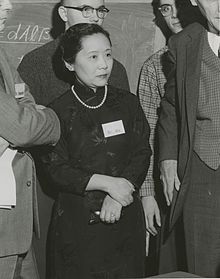 Chien-Shiung Wu in 1958 at Columbia University

Chien-Shiung Wu (May 31, 1912 – February 16, 1997) was a Chinese American experimental physicist who made significant contributions in the field of nuclear physics. Wu worked on the Manhattan Project, where she helped develop the process for separating uranium metal into uranium-235 and uranium-238 isotopes by gaseous diffusion. She is best known for conducting the Wu experiment, which contradicted the hypothetical law of conservation of parity. This discovery resulted in her colleagues Tsung-Dao Lee and Chen-Ning Yang winning the 1957 Nobel Prize in physics, and also earned Wu the inaugural Wolf Prize in Physics in 1978. Her expertise in experimental physics evoked comparisons to Marie Curie. Her nicknames include “the First Lady of Physics,” “the Chinese Madame Curie,” and the “Queen of Nuclear Research.”

Early life and education
Chien-Shiung Wu was born in the town of Liuhe in Taicang, Jiangsu province, China, on May 31, 1912, the second of three children of Wu Zhong-Yi (???) and Fan Fu-Hua. The family custom was that children of this generation had Chien as the first character of their forename, followed by the characters in the phrase Ying-Shiung-Hao-Jie, which means “heroes and outstanding figures”. Accordingly, she had an older brother, Chien-Ying, and a younger brother, Chien-Hao. Wu and her father were extremely close and he encouraged her interests passionately, creating an environment where she was surrounded by books, magazines, and newspapers.

Wu received her elementary school education at Ming De School, a school for girls founded by her father. She left her hometown in 1923 at the age of 11 to go to the Suzhou Women’s Normal School No. 2. This was a boarding school with classes for teacher training as well as for regular high school. Admission to teacher training was more competitive, as it did not charge for tuition or board, and guaranteed a job on graduation. Although her family could have afforded to pay, Wu chose the more competitive option, and was ranked ninth among around 10,000 applicants.

In 1929 Wu graduated at the top of her class, and was admitted to the National Central University in Nanjing. According to the governmental regulations of the time, teacher-training college students wanting to move on to the universities needed to serve as schoolteachers for one year. In Wu’s case, this was only nominally enforced. She went to teach at the Public School of China (zh) in Shanghai, the president of which at the time was the philosopher Hu Shih, whose class she took.

From 1930 to 1934, Wu studied at the National Central University (later renamed Nanjing University and reinstated in Taiwan), first in mathematics, but later transferring to physics.[10] She became involved in student politics. Relations between China and Japan were tense at this time, and students were urging the government to take a stronger line with Japan.[11] Wu was elected as one of the student leaders by her colleagues because they felt that since she was one of the top students at the university, her involvement would be forgiven, or at least overlooked, by the authorities. That being the case, she was careful not to neglect her studies. She led protests that included a sit-in at the Presidential Palace in Nanjing, where the students were met by Chiang Kai-shek.

For two years after graduation, she did graduate-level study in physics and worked as an assistant at the Zhejiang University. She became a researcher at the Institute of Physics of the Academia Sinica. Her supervisor was Professor Gu Jing-Wei, who had earned her PhD abroad at the University of Michigan, and encouraged Wu to do the same. Wu was accepted by the University of Michigan, and her uncle, Wu Zhou-Zhi, provided the necessary funds. She embarked for the United States with a female friend, Dong Ruo-Fen (???), a chemist from Taicang, on the SS President Hoover in August 1936. Her parents and uncle saw her off. She would never see her parents again.

During World War II, Wu was asked to join the Manhattan Project at Columbia University, which was the Army’s secret project to develop the atomic bomb. She helped develop a process to enrich uranium ore that produced large quantities of uranium as fuel for the bomb.

After the war, she stayed at Columbia as a research assistant. In 1957, she and her colleagues Dr. Tsung-Dao Lee and Dr. Chen Ning Yang overthrew a law of symmetry in physics called the principle of conservation of parity. Wu observed that there is a preferred direction of emission, which disproved what was then a widely accepted “law” of nature. Her discovery about the law of parity was not recorded, and both Lee and Yang won the 1957 Nobel Prize in Physics, but Dr. Wu was not included in the award.

Even though she did not receive the Nobel Prize, Wu received many other honors and awards. She was named full professor at Columbia in 1958 and authored the book Beta Decay in 1965. She was appointed as the first Pupin Professor of Physics in 1973. Wu was the first woman elected to the American Physical Society as well as the first woman to receive the Cyrus B. Comstock Award of the U.S. National Academy of Sciences. She was also a recipient of the Medal of Science, the nation’s highest scientific award, and became the first woman ever to be awarded an honorary doctorate from Princeton University.

Wu continued to teach at Columbia University and conduct nuclear research until her retirement in 1981. After her retirement, she lectured widely and encouraged the participation of young women in scientific careers and became known as the “First Lady of Physics”. She died on February 16, 1997 in New York. (National Women’s History Museum)