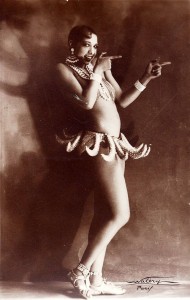 Josephine Baker (June 3, 1906 – April 12, 1975) was an American-born French dancer, singer, and actress who came to be known in various circles as the “Black Pearl,” “Bronze Venus” and even the “Creole Goddess”. Born Freda Josephine McDonald in St. Louis, Missouri, Josephine later became a citizen of France in 1937. She was fluent in both English and French.

Baker was the first black woman to star in a major motion picture, Zouzou (1934) or to become a world-famous entertainer. Baker, who refused to perform for segregated audiences in America, is also noted for her contributions to the Civil Rights Movement. She was once offered unofficial leadership in the movement in the United States by Coretta Scott King in 1968, following Martin Luther King, Jr.’s assassination. Baker, however, turned down the offer. She was also known for assisting the French Resistance during World War II, and received the French military honor, the Croix de guerre and was made a Chevalier of the Légion d’honneur by General Charles de Gaulle.

Work during World War II
In September 1939, when France declared war on Germany in response to the invasion of Poland, Baker was recruited by Deuxième Bureau, French military intelligence, as an “honorable correspondent”. Baker collected what information she could about German troop locations from officials she met at parties. She specialized in gatherings at embassies and ministries, charming people as she had always done, while gathering information. Her café-society fame enabled her to rub shoulders with those in the know, from high-ranking Japanese officials to Italian bureaucrats, and to report back what she heard. She attended parties at the Italian embassy without any suspicion falling on her and gathered information.

When the Germans invaded France, Baker left Paris and went to the Château des Milandes, her home in the south of France. She housed friends who were eager to help the Free French effort led by Charles de Gaulle and supplied them with visas. As an entertainer, Baker had an excuse for moving around Europe, visiting neutral nations such as Portugal and some in South America, carrying information for transmission to England, about airfields, harbors, and German troop concentrations in the West of France. It would be written in invisible ink on Josephine’s sheet music.

Later in 1941, she and her entourage went to the French colonies in North Africa; the stated reason was Baker’s health (since she really was recovering from another case of pneumonia) but the real reason was to continue helping the Resistance. From a base in Morocco, she made tours of Spain and pinned notes with the information she gathered inside her underwear (counting on her celebrity to avoid a strip search) and made friends with the Pasha of Marrakesh, whose support helped her through a miscarriage (the last of several). After the miscarriage she developed an infection so severe it required a hysterectomy. However, the infection was not contained and she developed peritonitis and then septicemia. After her recovery (which she continued to fall in and out of), she started touring to entertain British, French, and American soldiers in North Africa. The Free French had no organized entertainment network for their troops so Baker and her friends managed for the most part on their own with no civilians and no admission charge. To this day, veterans greatly remember her performances.

In Cairo, Egypt’s King Farouk asked her to sing to which she refused because Egypt had not recognized Free France and remained neutral. However, she offered to sing in Cairo at a celebration of honor for the ties between Free France and Egypt and asked Farouk to preside, a subtle indication of which side his officially neutral country leaned toward.

After the war, for her underground activity, Baker received the Croix de guerre and the Rosette de la Résistance, and was made a Chevalier of the Légion d’honneur by General Charles de Gaulle.…

Later years and death
In 1964, Josephine Baker lost her castle due to unpaid debts; after, Princess Grace offered her an apartment in Roquebrune, near Monaco.

Baker was back on stage at the Olympia in Paris in 1968, in Belgrade in 1973, at Carnegie Hall in 1973, at the Royal Variety Performance at the London Palladium in 1974 and at the Gala du Cirque in Paris in 1974. On April 8, 1975, Baker starred in a retrospective revue at the Bobino in Paris, Joséphine à Bobino 1975, celebrating her 50 years in show business. The revue, financed notably by Prince Rainier, Princess Grace, and Jacqueline Kennedy Onassis, opened to rave reviews. Demand for seating was such that fold-out chairs had to be added to accommodate spectators. The opening night audience included Sophia Loren, Mick Jagger, Shirley Bassey, Diana Ross, and Liza Minnelli.

Four days later, Baker was found lying peacefully in her bed surrounded by newspapers with glowing reviews of her performance. She was in a coma after suffering a cerebral hemorrhage. She was taken to Pitié-Salpêtrière Hospital, where she died, aged 68, on April 12, 1975. She received a full Roman Catholic funeral which was held at L’Église de la Madeleine. The only American-born woman to receive full French military honors at her funeral, Baker locked up the streets of Paris one last time. After a family service at Saint-Charles Church in Monte Carlo, Baker was interred at Monaco’s Cimetière de Monaco.