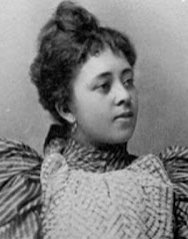 Henrietta Cordelia Ray (August 30, 1852 – 1916) was an African-American poet and teacher. She was the sister of Charlotte E. Ray. She was born in New York City to Charlotte Augusta Burrough and clergyman, abolitionist, and newspaper publisher Charles B. Ray, and named for his first wife, Henrietta Ray.

In 1891 Cordelia graduated from the University of the City of New York with a master’s in pedagogy. She also studied French, German, Greek and Latin at the Saveneur School of Languages. She became a schoolteacher, but stopped teaching in order to write.

Ray’s ode “Lincoln” was read at the unveiling of the Emancipation Memorial in Washington, D.C in April 1876. A memoir of her father, written with her sister Florence, was published by J.J. Little & Co. in 1887.Her Sonnets were printed, also by Little, in 1893, and her Poems were published in 1910.

Sonnets
Ray’s Sonnets was a short book of twelve sonnets on Milton, Shakespeare, Raphael, and Beethoven, among other subjects.. Her sonnet on the Haitian revolutionary Toussaint L’Overture is notable for its belated engagement in black politics (absent from her earlier verse) and for its allusions to William Wordsworth’s famous sonnet, “To Touissaint L’Overture”:

To those fair isles where crimson sunsets burn,
We send a backward glance to gaze on thee,
Brave Toussaint! thou was surely born to be
A hero; thy proud spirit could but spurn
Each outrage on the race. Couldst thou unlearn
The lessons taught by instinct? Nay! and we
Who share the zeal that would make all men free,
Must e’en with pride unto thy life-work turn.
Soul-dignity was thine and purest aim;
And ah! how sad that thou wast left to mourn
In chains ’neath alien skies. On him, shame! shame!
That mighty conqueror who dared to claim
The right to bind thee. Him we heap with scorn,
And noble patriot! guard with love thy name.

Ray’s reputation rests on her 1912 volume, from which poems were republished widely in anthologies in the early twentieth century. Her work has been rediscovered in twenty-first-century scholarship.

The subtlest strain a great musician weaves,
Cannot attain in rhythmic harmony
To music in his soul. May it not be
Celestial lyres send hints to him? He grieves
That half the sweetness of the song, he leaves
Unheard in the transition. Thus do we
Yearn to translate the wondrous majesty
Of some rare mood, when the rapt soul receives
A vision exquisite. Yet who can match
The sunset’s iridescent hues? Who sing
The skylark’s ecstasy so seraph-fine?
We struggle vainly, still we fain would catch
Such rifts amid life’s shadows, for they bring
Glimpses ineffable of things divine.

“Limitations” was published in Ray’s book Poems (The Grafton Press, 1910) (from the spectrum ‘Poem a Day’)