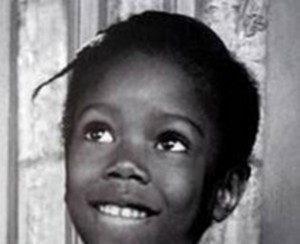 Born on September 8, 1954, in Tylertown, Mississippi, Ruby Bridges was 6 when she became the first African-American child to integrate a white Southern elementary school, having to be escorted to class by her mother and U.S. marshals due to violent mobs. Bridges’ bravery paved the way for continued Civil Rights action and she’s shared her story with future generations in educational forums.

Escorted by Federal Marshals
In 1960, Ruby Bridges’ parents were informed by officials from the NAACP that she was one of only six African-American students to pass the test. Ruby would be the only African-American student to attend the William Frantz School, near her home, and the first black child to attend an all-white elementary school in the South. When the first day of school rolled around in September, Ruby was still at her old school. All through the summer and early fall, the Louisiana State Legislature had found ways to fight the federal court order and slow the integration process. After exhausting all stalling tactics, the Legislature had to relent, and the designated schools were to be integrated that November. Fearing there might be some civil disturbances, the federal district court judge requested the U.S. government send federal marshals to New Orleans to protect the children. 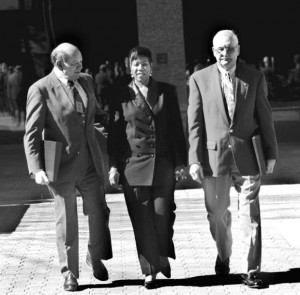 On the morning of November 14, 1960, federal marshals drove Ruby and her mother five blocks to her new school. While in the car, one of the men explained that when they arrived at the school, two marshals would walk in front of Ruby and two would be behind her. The image of this small black girl being escorted to school by four large white men inspired Norman Rockwell to create the painting “The Problem We All Must Live With,” which graced the cover of Look magazine in 1964.

When Ruby and the federal marshals arrived at the school, large crowds of people were gathered in front yelling and throwing objects. There were barricades set up, and policemen were everywhere. Ruby, in her innocence, first believed it was like a Mardi Gras celebration. When she entered the school under the protection of the federal marshals, she was immediately escorted to the principal’s office and spent the entire day there. The chaos outside, and the fact that nearly all the white parents at the school had kept their children home, meant classes weren’t going to be held. …

Recent Contributions
In 1993, Ruby Bridges’ youngest brother, Malcolm Bridges, was murdered in a drug-related killing. For a time, Ruby looked after Malcolm’s four children, who attended William Frantz School. She began to volunteer at the school three days a week and soon became a parent-community liaison. The coincidence of all this, to have her brother’s death bring her back to her elementary school where so much had taken place, didn’t escape Ruby, but she wasn’t sure why all this happened. In 1995, she got her answer. Robert Coles, Bridges’ child psychologist, published a children’s book on his time with her, entitled The Story of Ruby Bridges. Soon after, Barbara Henry, her teacher that first year at Frantz School, contacted Bridges and they were reunited on The Oprah Winfrey Show.

With Bridges’ experience as liaison at the school, and her reconnection with influential people in her past, she began to see a need for bringing parents back into the schools to take a more active role in their children’s education. In 1999, Bridges formed the Ruby Bridges Foundation, headquartered in New Orleans. The foundation promotes the values of tolerance, respect, and appreciation of all differences. Through education and inspiration, the foundation seeks to end racism and prejudice. As its motto goes, “Racism is a grown-up disease and we must stop using our children to spread it.” In 2007, the Children’s Museum of Indianapolis unveiled a new exhibition documenting Bridges’ life, along with the lives of Anne Frank and Ryan White. (Biography.com)