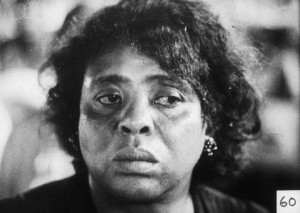 The Freedom Democrats’ efforts drew national attention to the plight of African Americans in Mississippi, and represented a challenge to President Lyndon B. Johnson, who was seeking the Democratic Party’s nomination for reelection; their success would mean that other Southern delegations, who were already leaning toward Republican challenger Barry Goldwater, would publicly break from the convention’s decision to nominate Johnson — meaning in turn that he would almost certainly lose those states’ electoral votes. Hamer, singing her signature hymns, drew a great deal of attention from the media, enraging Johnson, who referred to her in speaking to his advisors as “that illiterate woman”.

Hamer was invited, along with the rest of the MFDP officers, to address the Convention’s Credentials Committee. She recounted the problems she had encountered in registration, and the ordeal of the jail in Winona. Near tears, she concluded:

“All of this is on account we want to register [sic], to become first-class citizens, and if the Freedom Democratic Party is not seated now, I question America. Is this America, the land of the free and the home of the brave where we have to sleep with our telephones off the hooks because our lives be threatened daily because we want to live as decent human beings — in America? —Fannie Lou Hamer” 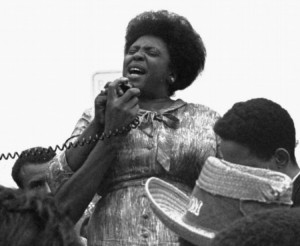 In Washington, D.C., President Johnson, fearful of the power of Hamer’s testimony on live television, called an emergency press conference in an effort to divert press coverage. The television networks switched to the White House from their coverage of Hamer’s address, believing that Johnson would announce his vice-presidential candidate for the forthcoming November election. Instead, to the bemusement of journalists, he arbitrarily announced the nine-month anniversary of the shooting of Texas governor, John Connally, during the assassination of John F. Kennedy. However, many television networks ran Hamer’s speech unedited on their late news programs. The Credentials Committee received thousands of calls and letters in support of the Freedom Democrats.

Johnson then dispatched several trusted Democratic Party operatives to attempt to negotiate with the Freedom Democrats, including Senator Hubert Humphrey (who was campaigning for the Vice-Presidential nomination), Walter Mondale, and Walter Reuther, as well as J. Edgar Hoover. They suggested a compromise which would give the MFDP two non-voting seats in exchange for other concessions, and secured the endorsement of Martin Luther King, Jr. and the Southern Christian Leadership Conference for the plan. But when Humphrey outlined the compromise, saying that his position on the ticket was at stake, Hamer, invoking her Christian beliefs, sharply rebuked him:

“Do you mean to tell me that your position is more important than four hundred thousand black people’s lives? Senator Humphrey, I know lots of people in Mississippi who have lost their jobs trying to register to vote. I had to leave the plantation where I worked in Sunflower County, Mississippi. Now if you lose this job of Vice-President because you do what is right, because you help the MFDP, everything will be all right. God will take care of you. But if you take [the nomination] this way, why, you will never be able to do any good for civil rights, for poor people, for peace, or any of those things you talk about. Senator Humphrey, I’m going to pray to Jesus for you. —Fannie Lou Hamer”

Future negotiations were conducted without Hamer, and the compromise was modified such that the Convention would select the two delegates to be seated “at-large”, with no voting rights. The MFDP rejected the compromise, with Hamer making the famous quote:

“We didn’t come all the way up here to compromise for no more than we’d gotten here. We didn’t come all this way for no two seats when all of us is tired. —Fannie Lou Hamer”
In 1968 the MFDP was finally seated, after the Democratic Party adopted a clause which demanded equality of representation from their states’ delegations. In 1972, Hamer was elected as a national party delegate.

Death
Hamer died of heart failure due to hypertension on March 14, 1977, at the age of 59 at a hospital in Mound Bayou, Mississippi and was buried in her hometown of Ruleville, Mississippi. Her tombstone is engraved with one of her famous quotes:

Her primary memorial service, held at a church, was completely full. An overflow service was held at Ruleville Central High School, with over 1,500 people in attendance. Andrew Young, the United States Ambassador to the United Nations at that time, spoke at the RCHS service.

Rep. James Clyburn on “the Case for Reparations”