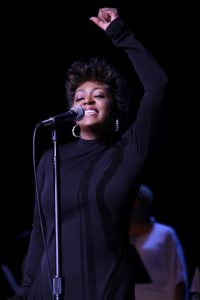 Anita Baker performing at Radio City Music Hall on May 6, 2012

Anita Denise Baker (born January 26, 1958) is a retired American singer-songwriter. Starting her career in the late 1970s with the funk band Chapter 8, Baker eventually released her first solo album, The Songstress, in 1983. In 1986, she rose to stardom following the release of her platinum-selling second album, Rapture, which included the Grammy-winning single “Sweet Love”. To date, Baker has won eight Grammy Awards and has five platinum albums and one gold album to her credit. Baker’s vocal range is contralto.

Mainstream success: 1986–1995
In March 1986, Baker released her second album, Rapture. While sales were initially slow following the release of the album’s debut single, “Watch Your Step”, Elektra released the mid-tempo ballad, “Sweet Love”, which became her first pop hit, reaching number eight on the Billboard Hot 100 and also reaching the UK Top 20. The album eventually launched three further hit singles, including “Caught Up in the Rapture”, “No One in the World” and “Same Ole Love (365 Days a Year)”. Throughout 1986 and 1987, Baker promoted the album by touring, headlining her first tour, The Rapture Tour, a show from which was later released on home video as A Night of Rapture. By 1988, the album had sold over 8 million copies worldwide, 5 million of which were sold in the United States alone. The album resulted in Baker’s winning two Grammy Awards at the 1987 ceremony. In 1987, Baker collaborated with The Winans on their song, “Ain’t No Need to Worry”, which gave Baker a third Grammy, this time in the Best Soul Gospel Performance by a Duo or Group, Choir or Chorus category.

Baker’s follow-up, Giving You the Best That I Got, was released in October 1988 and immediately became a success, topping the Billboard 200 and selling 5 million copies worldwide, 3 million of which sold alone in the United States. The title track reached number three on the Billboard Hot 100 and topped the R&B and adult contemporary charts, becoming her most successful charted single. The follow-up, “Just Because”, reached the top 20 on the pop chart, while a third single, “Lead Me Into Love”, became a top ten R&B hit. The album resulted in three more Grammy Awards for the singer. In 1990, Baker released Compositions, which had Baker more involved in the songwriting and production process and the first in which she began incorporating more jazz elements than in previous albums. The album launched the singles “Talk to Me”, “Soul Inspiration” and “Fairy Tales”, and eventually sold over a million copies. After the end of the album’s touring and promotion schedule in 1991, Baker took a break from the business when she settled down with her husband at the time, later having two children together. Also in 1991, Elektra re-issued Baker’s first album, The Songstress, after buying rights to the album. It has sold more than 300,000 copies since its release.

After appearing on Frank Sinatra’s Duets album, Baker officially returned to the charts with Rhythm of Love in 1994. The album featured the hit “Body and Soul”, which became her first top 40 pop hit since 1989; the second single, the mid-tempo “I Apologize”, later won Baker an eighth Grammy. The album eventually sold over 2 million copies, resulting in her fourth consecutive platinum-selling album. Baker undertook the Rhythm of Love World Tour from December 14, 1994 to November 14, 1995. Baker was transferred to another label within the Warner Music Group, Atlantic Records, in 1996.

Hiatus years and return: 1996–present
Taking a hiatus after the end of the Rhythm of Love Tour to care for her two sons, Baker did not return to the studio until August 2000. However, the recordings she made during this period were ruined by random popping noises from the rented 24-track tape machine. In May 2001, Baker filed a lawsuit in federal court against Zomba Recording Corp. and its Dreamhire division. Due to a label restructuring, Baker was let go from Atlantic that November without releasing any material with the company. During this hiatus, Rhino Records released the compilation, The Best of Anita Baker (named Sweet Love: The Very Best of Anita Baker in the UK) in June 2002. The album eventually was certified platinum by the RIAA, denoting sales in excess of 1,000,000 units in the US.

That year, Baker returned to live performing which inspired her to seek a new recording deal, eventually signing with Blue Note Records in March 2004. That September, Baker released the album, My Everything. Despite her decade-long absence from the charts, the album peaked at number four on the Billboard 200 and number-one on the R&B charts, eventually being certified gold. In 2005, Baker released the Christmas album, Christmas Fantasy, winning a Grammy nomination for the song, “Christmas Time Is Here”. Starting in 2007, Baker embarked on a two-year concert tour titled An Evening with Anita Baker. … In December 2011, Baker had been scheduled to sing “Sweet Love” during a tribute show for Detroit R&B music. Rumors of friction between Baker and fellow performer Jill Scott were initially seen as a possible cause of Baker leaving the show at the last minute. However, Baker attributed her exit to its producers refusing to allow her to properly rehearse her number with the other performers who would be singing with her, presumably Marsha Ambrosius and Ledisi, who sang “Sweet Love” on the show’s broadcast.

In August 2012, Baker released her version of Tyrese’s hit, “Lately”. The song made headlines for Baker after the song was played on every single hour of the hour throughout the day on urban adult contemporary radio, making her the first artist to make this kind of debut. Baker has been working on the album featuring the single, “Only Forever”, since 2010.[16] Though Blue Note set release dates for the album in October and December 2012, Baker decided she still needed to work on the album, causing delays. Currently the album has no release date. In February 2013, Baker returned to the national spotlight, performing “Lately” and “Same Ole Love” on Jimmy Kimmel Live! That same month, she appeared at the Grammys where “Lately” was nominated for a Grammy Award.