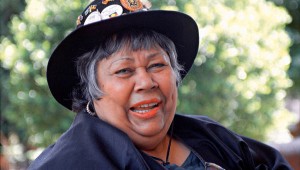 According to Langford’s memoir, Don’t Take Your Love to Town, her parents married in September 1934, eight months after her birth, and she was originally named Ruby Maude Anderson. Langford was her husband’s surname, and Ginibi is a Bundjalung honorific.

Life and career
Born at the Box Ridge Mission, Coraki on New South Wales’s northern coast, Langford was raised at Bonalbo and attended high school in Casino. At 15, she moved to Sydney where she qualified as a clothing machinist. She had nine children by various relationships, but only legally married once, to Peter Langford, whose surname she took as her own. Three of Langford’s children predeceased her. Her best-known book was the autobiographical Don’t Take Your Love to Town, published in 1988, which won the Australian Human Rights and Equal Opportunity Commission Human Rights Award for Literature.

In 2005 she was awarded the New South Wales Premier’s Literary Awards Special Award. Her works are studied in Australian high schools and universities. In 2006, she won the Australia Council for the Arts Writers’ Emeritus Award. She received the award with its prize of up to $50,000 at a ceremony during the Sydney Writers’ Festival. The award recognises the achievements of writers over the age of 65. In 2008, Ginibi was a Don’t DIS my ABILITY ambassador. She wrote non-fiction books, essays, poems and short stories.

Death
Langford had been suffering kidney problems and high blood pressure before her death at Fairfield Hospital, Sydney, aged 77, on 1 October 2011.