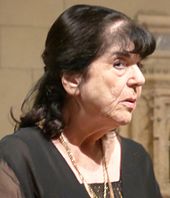 Eve Queler (born January 11, 1931) is an American conductor and the emerita Artistic Director of the Opera Orchestra of New York (OONY). She founded the OONY in 1971, after having worked on the staff of the Metropolitan Opera and the New York City Opera. She is notable for her advocacy for, and conducting of, lesser known and less-frequently performed operas, such as Renzi and Jenufa. 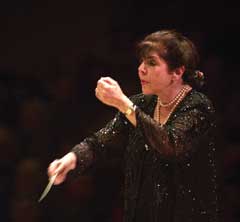 Born Eve Rabin in New York City, Queler attended the Fiorello H. LaGuardia High School of Music & Art and Performing Arts, graduating in 1948. She then matriculated in the Mannes College The New School for Music, where she studied piano and conducting. A Martha Baird Rockefeller Fund grant enabled her to pursue further studies in conducting with Joseph Rosenstock and accompaniment with Paul Ulanowsky and Paul Berl. She also participated in master classes with Walter Susskind and Leonard Slatkin in St Louis and Igor Markevich and Herbert Blomstedt in Europe.

Eve Queler is the recipient of a 2010 National Endowment for the Arts Opera Honors Award.

Equally at home with symphonic repertoire, Maestro Queler has conducted numerous symphony orchestras including the Philadelphia Orchestra, Cleveland Orchestra, the Montreal Symphony, and the Orchestra Sinfonica Siciliana in Palermo, Sicily.

Ms. Queler is the recipient of numerous awards. In addition to the 2010 National Endowment for the Arts Lifetime Achievement award, she has received the Chevalier de l’Ordre des Arts et des Lettres (arguably the highest award presented by the French government),and the Sanford Medal, Yale University’s highest Musical Honor. (EveQueler.com)