Käthe Kollwitz (1867 – 1945) is regarded as one of the most important German artists of the twentieth century, and as a remarkable woman who created timeless artworks against the backdrop of a life of great sorrow, hardship, and heartache.

Käthe was born in 1867 in Konigsberg, East Prussia (now Kalingrad in Russia). She studied art in Berlin and began producing etchings in 1880 In 1881 she married Dr Karl Kollwitz and they settled in a working class area of north Berlin. In 1896 her second son, Peter, was born. From 1898 to 1903 Kathe taught at the Berlin School of Women Artists, and in 1910 began to create sculpture. 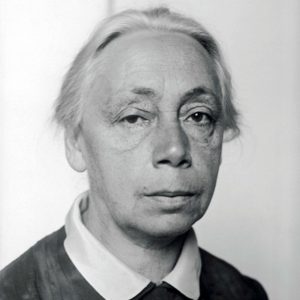 In 1914 her son Peter was killed in Flanders (WWI). The loss of Peter contributed to her socialist and pacifist political sympathies. In 1919 she worked on a commemorative woodcut dedicated to Karl Liebknecht, the revolutionary socialist murdered in 1919. Kathe believed that art should reflect the social conditions of the time and during the 1920s she produced a series of works reflecting her concern with the themes of war, poverty, working class life and the lives of ordinary women.

In 1932 the war memorial to her son Peter—The Parents—was dedicated at Vladslo military cemetery in Flanders. Käthe became the first woman to be elected to the Prussian Academy of Arts, but in 1933, when Hitler came to power, she was expelled from the Academy. In 1936 she was barred by the Nazis from exhibiting, her art was classified as ‘degenerate’ and her works were removed from galleries.

In 1940 Karl Kollwitz died. In 1942 her grandson, Peter, was killed at the Russian front. In 1943 Käthe’s home was destroyed by British bombing and she was evacuated from Berlin to Moritzburg, near Dresden.

The significance of the Vladslo memorial
Extracts from The Great War and the Shaping of the Twentieth Century, Jay Winter

A few miles north of the medieval city of Ypres in Belgium is a German war cemetery. It lies in a field near the small town of Vladslo. In the cemetery are the graves of hundreds of men killed in the early days of World War I. Among the graves is that of Peter Kollwitz, a student from Berlin who volunteered as soon as the war broke out. Two months later, in October 1914, he was killed, aged nineteen, in one of the war’s first major campaigns.

Käthe Kollwitz was informed of her son’s death in action on 30 October. ‘Your pretty shawl will no longer be able to warm our boy,’ was the touching way she broke the news to a close friend. To another friend, she admitted, ‘There is in our lives a wound which will never heal. Nor should it.’

By December 1914 Kollwitz, one of the foremost artists of her day, had formed the idea of creating a memorial to her son, with his body outstretched, ‘the father at the head, the mother at the feet’, to commemorate ‘the sacrifice of all the young volunteers’. As time went on she attempted various other designs but was dissatisfied with them all. Kollwitz put the project aside temporarily in 1919, but her commitment to see it through when it was right was unequivocal. ‘I will come back, I shall do this work for you, for you and the others,’ she noted in her diary in June 1919.

Twelve years later, she kept her word: in April 1931 she was at last able to complete the sculpture. ‘In the autumn – Peter, – I shall bring it to you,’ she wrote in her diary. Her work was exhibited in the National Gallery in Berlin and then transported to Belgium, where it was placed, as she had promised, adjacent to her son’s grave. There it rests to this day.

Käthe Kollwitz’s war memorial was an offering to a son who had offered his life for his country. That she was only able to complete it eighteen years after his death should tell us something about how unconvincing is the view that the Great War ended when the textbooks tell us, on 11 November 1918. For millions of people who had to live with the human costs of the conflict, the war lasted much, much longer. It is for this reason that it makes sense to suggest that, in an important way, the contours of the history of the Great War, the history endured by millions of ordinary men and women, are visible at Vladslo.

The war opened in 1914 as a conflict which almost everyone believed would last for a few months. But the slaughter of Peter Kollwitz and the armies of 1914 did not result in a decisive victory. Instead, by the end of that year stalemate had set in: the Great War was born, a war which was to last fully 1,500 days.

At the Armistice of 11 November I9I8, the German Army was not far from Vladslo. It was still in occupation of large parts of Belgium. But it had been defeated. The Allies had won the war, at an unimaginable cost. In all combatant armies, over 9 million men had died in uniform; perhaps twice that number had been wounded. And an even larger number of people in every combatant country – wives and brothers, sons and daughters, mothers and fathers like Käthe and Karl Kollwitz – were in mourning. [That is the meaning] of Vladslo: in the midst of a Great War battlefield returned to farmland, holding together the remains of the fallen and the gestures of the survivors.

The story of the pilgrimage of one mother and father to their son’s grave stands for millions of others. In August 1932 a war memorial was unveiled at the Roggevelde German war cemetery, near Vladslo in Flemish Belgium: a sculpture of two parents mourning their son, killed in October 1914· It is the work of Käthe Kollwitz. There is no more moving monument to the grief of those who lost their sons in the war than this simple stone sculpture of two parents, on their knees, before their son’s grave.

There is no artist’s signature, no location in time or space – only the universal sadness of two aged people, surrounded by the dead like ‘a flock of lost children’. The phrase is Käthe Kollwitz’s own. The story of her struggle to commemorate her son’s death testifies both to her humanity and to her achievement in creating a timeless memorial, a work of art of extraordinary power and feeling.

Kollwitz was only able to complete the memorial eighteen years after her son’s death, which alone should tell us something about the process of bereavement described so movingly in her diary and in her work. That process was in no sense unique. Kollwitz was haunted by dreams of her son and felt his presence in the same way that other bereaved parents did throughout the world. She spent hours sitting in his room. In October 1916, she wrote in her diary that ‘I can feel Peter’s being. He consoles me, he helps me in my work.’ She rejected the idea of spirits returning, but was drawn to the ‘possibility of establishing a connection here, in this life of the senses, between the physically alive person and the essence of someone physically dead’. Call it ‘theosophy or spiritism or mysticism’ if you will, she noted, but the presence was there none the less. ‘I have felt you, my boy – oh, many many times.’ Even after the pain of loss began to fade she still spoke to her dead son, especially when working on his memorial.

What gives Kollwitz’s mourning an added dimension was her sense of guilt, of remorse over the responsibility of the older generation for the slaughter of the young. This feeling arose from her initial apprehensive but positive reaction to Peter’s decision to volunteer. Her vision was internationalist and hostile to the philistine arrogance of official Germany. But, as she said time and again, she believed in a higher duty than mere self-interest, and had felt before 1914 that ‘behind the individual life … stood the Fatherland’. She knew that her son had volunteered with a ‘pure heart’, filled with patriotism, ‘love for an idea, a commandment’, but still she had wept bitterly at his departure.

To find, as she did later in the war, that his idealism was misplaced, that his sacrifice was for nothing, was difficult for many reasons. First, it created a distance between her and her son. ‘Is it a break of faith with you, Peter,’ she wrote in October 1916,’if I can now see only madness in the war?’ He had died believing; how could his mother not honour that belief? But to feel that the war was an exercise in futility led to an even more damaging admission – that her son and his whole generation had been ‘betrayed’.

This recognition was painful, but when she reached it in 1918 she did not flinch from giving it artistic form. This is one reason why it took so long for her to complete the monument, and why she and her husband are on their knees before their son’s grave. They are there to beg his forgiveness, to ask him to accept their failure to find a better way, their failure to prevent the madness of war from cutting his life short.

At Roggevelde, on their knees, Käthe and Karl Kollwitz suggest a family which includes us all. And that may be precisely what she had in mind: the most intimate here is also the most universal. In a powerful sense, this memorial in a German war cemetery is a family reunion, a foretaste of what her broad religious faith suggested would happen at some future date. The sense of completeness, of healing, of transcendence, is transparently present in her moving account of her last visit to the memorial. She was alone with her husband: ‘we went from the figures to Peter’s grave, and everything was alive and wholly felt. I stood before the woman, looked at her – my own face – and I wept and stroked her cheeks. Karl stood dose behind me – I did not even realize it. I heard him whisper, “Yes, yes. How close we were to one another then!’

This pilgrimage helped to heal one set of wounds just as another cruel period was about to begin … For Käthe Kollwitz, the war they unleashed brought still more suffering to her life. Her work was derided, but she was left alone by the Nazis. Her husband died in 1940. Her grandson Peter, named after his uncle who had died in Belgium in 1914, was killed on the Russian Front in 1942.

The next year, she had to leave Berlin due to Allied bombing: her house and much of her work was destroyed on 23 November 1943. If World War I had blurred the distinction between civilian and military targets, World War II erased it. ‘Carpet bombing’ of cities became an ordinary event. ‘It is almost incomprehensible to me’, Kathe Kollwitz wrote, ‘what degrees of endurance people can manifest. In days to come people will hardly understand this age. What a difference between now and 1914… People have been transformed so that they have this capacity for endurance… Worst of all is that every war already carries within the war which will answer it. Every war is answered by a new war, until everything, everything is smashed.’