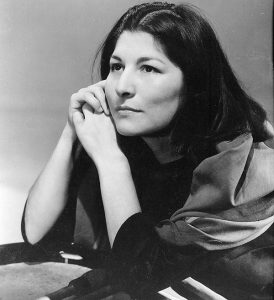 Haydée Mercedes Sosa (9 July 1935 – 4 October 2009), sometimes known as La Negra (literally: The Black One), was an Argentine singer who was popular throughout Latin America and many countries outside the region. With her roots in Argentine folk music, Sosa became one of the preeminent exponents of nueva canción. She gave voice to songs written by many Latin American songwriters. Her music made people hail her as the “voice of the voiceless ones”, and “the voice of America”.

Sosa performed in venues such as the Lincoln Center in New York City, the Théâtre Mogador in Paris and the Sistine Chapel in Vatican City, as well as sell-out shows in New York’s Carnegie Hall and the Roman Colosseum during her final decade of life. Her career spanned four decades and she was the recipient of several Grammy awards and nominations, including a posthumous Latin Grammy award for Best Folk Album. She served as an ambassador for UNICEF.

Sosa was born on 9 July 1935, in San Miguel de Tucumán, in the northwestern Argentine province of Tucumán, of mestizo, Spanish, French, and Diaguita Amerindian ancestry. Her parents were Peronists, although they never registered in the party, and she started her career as a singer for the Peronist Party in Provincia Tucuman under the name Gladys Osorio. In 1950, at age fifteen, she won a singing competition organized by a local radio station and was given a contract to perform for two months. She recorded her first album, La Voz de la Zafra, in 1959. A performance at the 1965 Cosquín National Folklore Festival—where she was introduced and brought to the stage while sitting in the audience by fellow folk singer Jorge Cafrune—brought her to the attention of her native countrypeople.

Sosa and her first husband, Manuel Óscar Matus, with whom she had one son, were key players in the mid-60s nueva canción movement (which was called nuevo cancionero in Argentina). Her second record was Canciones con Fundamento, a collection of Argentine folk songs. In 1967, Sosa toured the United States and Europe with great success. In later years, she performed and recorded extensively, broadening her repertoire to include material from throughout Latin America.

In the early 1970s, Sosa released two concept albums in collaboration with composer Ariel Ramírez and lyricist Félix Luna: Cantata Sudamericana and Mujeres Argentinas (Argentine Women). She also recorded a tribute to Chilean musician Violeta Parra in 1971, including what was to become one of Sosa’s signature songs, Gracias a la Vida. She also increased the popularity of songs written by Milton Nascimento of Brazil and Pablo Milanés and Silvio Rodríguez both from Cuba.

After the military junta of Jorge Videla came to power in 1976, the atmosphere in Argentina grew increasingly oppressive. Sosa faced death threats against both her and her family but refused for many years to leave the country. At a concert in La Plata in 1979, Sosa was searched and arrested on stage, along with all those attending the concert. Their release came about through international intervention. Banned in her own country, she moved to Paris and then to Madrid.

Sosa returned to Argentina from her exile in Europe in 1982, several months before the military regime collapsed as a result of the Falklands War, and gave a series of concerts at the Teatro Colón in Buenos Aires, where she invited many of her younger colleagues to share the stage. A double album of recordings from these performances became an instant best seller. In subsequent years, Sosa continued to tour both in Argentina and abroad, performing in such venues as the Lincoln Center in New York and the Théâtre Mogador in Paris. In a poor condition of health for much of the 1990s, she performed a comeback show in Argentina in 1998. In 1994, she played the Sistine Chapel in Vatican City. In 2002, she sold out both Carnegie Hall in New York and the Colosseum in Rome in the same year.

A supporter of Perón, she favored leftist causes throughout her life. She opposed President Carlos Menem, who was in office from 1989 to 1999, and supported the election of Néstor Kirchner, who became president in 2003. Sosa was a UNESCO Goodwill Ambassador for Latin America and the Caribbean.

Sosa participated in a 1999 production of Ariel Ramírez’s Misa Criolla. Her song Balderrama is featured in the 2008 movie Che, starring Benicio del Toro as the Argentine Marxist revolutionary Che Guevara.

Death
Suffering from recurrent endocrine and respiratory problems in later years, the 74-year-old Sosa was hospitalized in Buenos Aires on September 18, 2009. She died from multiple organ failure on October 4, 2009, at 5:15 am. She is survived by one son, Fabián Matus, born of her first marriage. He said: “She lived her 74 years to the fullest. She had done practically everything she wanted, she didn’t have any type of barrier or any type of fear that limited her”. The hospital expressed its sympathies with her relations. Her website featured the following: “Her undisputed talent, her honesty and her profound convictions leave a great legacy to future generations”.

Her body was placed on display at the National Congress building in Buenos Aires for the public to pay their respects, and President Fernández de Kirchner ordered three days of national mourning. Thousands had queued by the end of the day.[16] She was cremated on October 5.

Sosa’s obituary in The Daily Telegraph said she was “an unrivaled interpreter of works by her compatriot, the Argentine Atahualpa Yupanqui, and Chile’s Violeta Parra”. Helen Popper of Reuters reported her death by saying she “fought South America’s dictators with her voice and became a giant of contemporary Latin American music”. Sosa received three Latin Grammy nominations for her album, in 2009. She went on to win Best Folk Album about a month after her death.