Excerpts from Black Then and Wikipedia 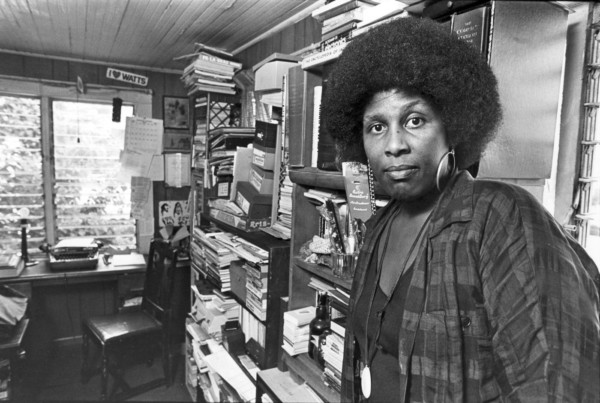 Wanda Evans was born in the Watts neighborhood of Los Angeles, where she grew up during the 1950s and 1960s. She is the eldest of four children. Her parents were George and Lewana (Scott) Evans, who were introduced to one another at church by his aunt. In 1931, her father had relocated to Los Angeles from Little Rock, Arkansas, after the lynching of a young man who was hung from a church steeple.

After graduating from John C. Fremont High School in Los Angeles, Wanda Evans enrolled at Los Angeles Valley College in Van Nuys, California. She transferred to California State University at Los Angeles but did not complete a degree.

Shortly after finishing high school, she married white Southerner Charles Coleman, a troubleshooter for the Student Non-Violent Coordinating Committee (SNCC) in the 1960s. Their union produced two children, Luanda and Anthony. She went on to marry two more times. Her third husband was poet Austin Straus, whom she married in 1981.

Coleman received fellowships from the John Simon Guggenheim Foundation, the National Endowment for the Arts, and the California Arts Council (in fiction and in poetry). She was the first C.O.L.A. Literary Fellow (Los Angeles Department of Cultural Affairs, 2003). Her honors included an Emmy in Daytime Drama writing.

While critically acclaimed for her creative writing, Coleman’s brush with notoriety came as a result of an unfavorable review she wrote in the April 14, 2002, issue of the Los Angeles Times Book Review of Maya Angelou’s book A Song Flung Up to Heaven. Coleman found the book to be “small and inauthentic, without ideas wisdom or vision.” Coleman’s review provoked positive and negative responses, including the cancellation of events and the rescinding of invitations. Her account of this incident appears in the September 16, 2002, edition of The Nation.

“In our post-9/11 America, where unwarranted suspicions and the fear of terrorism threaten to overwhelm long-coveted individual freedoms, a book review seems rather insignificant—until the twin specters of censorship and oppression are raised. What has made our nation great, despite its tortuous history steeped in slavery, are those who have persisted in honoring those freedoms, starting with the Constitution and its amendments. It is this striving toward making those freedoms available to every citizen, regardless of race, creed, color, gender, or origin, that makes the rest of the insanity tolerable. It is what allows me to voice my opinion, be it praise song or dissent, no matter who disagrees.”

we were never caught
we partied the southwest, smoked it from L.A. to El Dorado
worked odd jobs between delusions of escape
drunk on the admonitions of parents, parsons & professors
driving faster than the road or law allowed.
our high-pitched laughter was young, heartless & disrespected
authority. we could be heard for miles in the night

the Grand Canyon of a new manhood.
womanhood discovered
like the first sighting of Mount Wilson

we rebelled against the southwestern wind

we got so naturally ripped, we sprouted wings,
crashed parties on the moon, and howled at the earth

we lived off love. It was all we had to eat