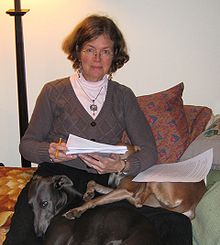 Robin McKinley (born November 16, 1952 as Jennifer Carolyn Robin McKinley) is an American author of fantasy and children’s books. Her 1984 novel The Hero and the Crown won the Newbery Medal as the year’s best new American children’s book. As of 2015 McKinley has written or contributed to twenty books. Her most recent novel is Shadows (2013), and her next anticipated novel is Ebon.

Writing
Robin McKinley has written a variety of novels, mostly in the fantasy genre. Several of her novels are her own personal renditions of classic fairy tales with a “feminist twist”. These retellings usually feature a strong female protagonist who does not wait to be rescued but instead takes an active role in determining the course of her own life. Beauty and Rose Daughter are both versions of Beauty and the Beast, Spindle’s End is the story of Sleeping Beauty, and Deerskin and two of the stories in The Door in the Hedge are based on other folk-tales. Besides adapting classic fairy tales, McKinley wrote her own rendition of the Robin Hood story in her novel The Outlaws of Sherwood.

McKinley has written two novels set in the imaginary land of Damar, The Blue Sword and The Hero and the Crown. Her contribution to the Imaginary Lands anthology and the stories in A Knot in the Grain are also set there. She describes herself as a “scribe” and “Damar’s historian”, because the stories “happen to her” and she is only responsible for writing them down. The stories of Damar have been occurring to her since before she wrote Beauty, and The Blue Sword was intended to be the first of a series about this land.

The heroines in McKinley’s books reflect certain qualities that she saw in herself as a young woman: clumsiness, plainness, bookishness, and disinterest in the usual social games that involve flirting and dating. She has said, “I didn’t discover boys because they didn’t discover me, and because their standards of discovery seemed to me too odd to be aspired to. They were the ones who got to have adventures, while we got to—well, not have adventures.”

McKinley says she writes about strong heroines because she feels very strongly about the potential for girls to be “doing things”, and she feels that the selection of fantasy literature featuring girls is scarce and unsatisfactory. According to biographer Marilyn H. Karrenbrock, “McKinley’s females do not simper; they do not betray their own nature to win a man’s approval. But neither do they take love lightly or put their own desires before anything else. In McKinley’s books, the romance, like the adventure, is based upon ideals of faithfulness, duty, and honor.”