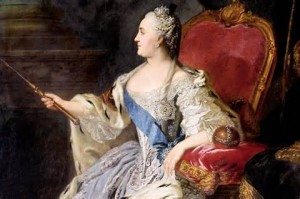 Yekaterina Alexeyevna, or Catherine II, also known as Catherine the Great (2 May [O.S. 21 April] 1729 – 17 November, 1796), was the most renowned and the longest-ruling female leader of Russia, reigning from 1762 until her death in 1796 at the age of 67. She was born in Stettin, Pomerania, Prussia as Sophie Friederike Auguste von Anhalt-Zerbst-Dornburg, and came to power following a coup d’état when her husband, Peter III, was assassinated. Russia was revitalized under her reign, growing larger and stronger than ever and becoming recognized as one of the great powers of Europe.

In both her accession to power and in rule of her empire, Catherine often relied on her noble favorites, most notably Grigory Orlov and Grigory Potemkin. Assisted by highly successful generals such as Pyotr Rumyantsev and Alexander Suvorov, and admirals such as Fyodor Ushakov, she governed at a time when the Russian Empire was expanding rapidly by conquest and diplomacy. In the south, the Crimean Khanate was crushed following victories over the Ottoman Empire in the Russo-Turkish wars, and Russia colonised the vast territories of Novorossiya along the coasts of the Black and Azov Seas. In the west, the Polish-Lithuanian Commonwealth, ruled by Catherine’s former lover, king Stanis?aw August Poniatowski, was eventually partitioned, with the Russian Empire gaining the largest share. In the east, Russia started to colonise Alaska, establishing Russian America. 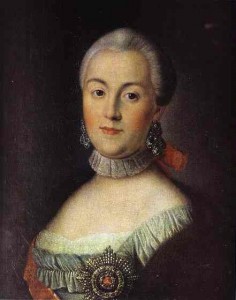 Catherine reformed the administration of Russian guberniyas, and many new cities and towns were founded on her orders. An admirer of Peter the Great, Catherine continued to modernise Russia along Western European lines. However, military conscription and economy continued to depend on serfdom, and the increasing demands of the state and private landowners led to increased levels of reliance on serfs. This was one of the chief reasons behind several rebellions, including the large-scale Pugachev’s Rebellion of cossacks and peasants.

The period of Catherine the Great’s rule, the Catherinian Era, is often considered the Golden Age of the Russian Empire and the Russian nobility. The Manifesto on Freedom of the Nobility, issued during the short reign of Peter III and confirmed by Catherine, freed Russian nobles from compulsory military or state service. Construction of many mansions of the nobility, in the classical style endorsed by the Empress, changed the face of the country. She enthusiastically supported the ideals of The Enlightenment, thus earning the status of an enlightened despot.[1] As a patron of the arts she presided over the age of the Russian Enlightenment, when the Smolny Institute, the first state-financed higher education institution for women in Europe, was established.

Remember the Ladies: Victoria of England