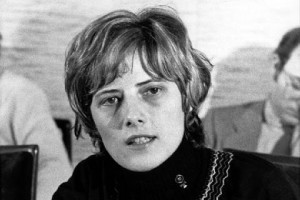 Kelly was born in Günzburg, Bavaria (then American Occupation Zone, Germany) in 1947, with the name Petra Karin Lehmann. She changed her name to Kelly after her mother married a US Army officer. She was educated in a Roman Catholic convent in Günzburg and later attended school in Georgia and Virginia after her family relocated to the United States in 1959. She lived and studied in the United States until her return to West Germany in 1970. She retained her (West) German citizenship throughout her life.

An admirer of Martin Luther King, Jr., she campaigned for Robert F. Kennedy and Hubert Humphrey in the 1968 U.S. elections. She studied political science at the School of International Service at American University (Washington, DC), from which she graduated in 1970. She graduated from the European Institute at the University of Amsterdam in 1971. While working at the European Commission (Brussels, Belgium, 1971–83), she participated in numerous peace and environmental campaigns in Germany and other countries. [Wikipedia]

Last October 19[92], German police entered an unimposing row house on the outskirts of Bonn, and made a gruesome discovery: the decomposing, bullet-pierced bodies of Petra Kelly, a founder of Germany’s Green party, and Gert Bastian, Kelly’s longtime companion. Conspiracists sniffed a double murder, possibly by neo-Nazis or by government agents. After investigating, however, police raised an even more troubling possibility. Mother Jones interviewed author Mark Hertsgaard, who recently traveled to Bonn to look into the case.

Describe the discovery of the bodies.
Police were summoned by the concierge, who had gone inside at the request of Kelly’s grandmother and Bastian’s wife [he was still married, though he had been with Kelly for more than ten years. No one had heard from the couple for several weeks. When police entered, the electric typewriter was still on downstairs. In it was a letter that Bastian was writing to his attorney. The subject was utterly banal, a minor legal matter. Bastian had stopped typing in the middle of the German word mussen, for “must.” He had typed mus … The police went upstairs and found Bastian sprawled in the hallway. By his hand was his gun, a derringer special, which holds only two bullets. One had been shot downward into the middle of his forehead from above. In the bedroom they discovered Petra Kelly’s body on the bed. The other bullet had been fired into her left temple from a distance of no more than two inches, and had killed her instantly.

So who killed them?
We’ll probably never know for sure, but the Bonn police are almost certain it was not a third party. They’ve taken no position on whether it was a joint murder-suicide, but they seem to have no doubt that Gert Bastian pulled the trigger both times. The only fingerprints in the entire house were Kelly’s and Bastian’s. Bastian had powder burns on his hand. That fact, combined with the peculiar trajectory of the bullet that killed Bastian, convinced police that he had killed her and himself.

Doesn’t the unfinished letter suggest a plausible alternative explanation-that he heard something, possibly an intruder?
Possibly. There’s one other fact that might support that theory: the upstairs second-floor balcony door was unlocked. But there were no strange footprints or signs of entry.

Isn’t it unusual to shoot oneself down through the forehead? Might not an intruder have shot Bastian from that angle?
Yes. But the larger question remains: How did the powder burns get on Bastian’s hand? Police found no other bullet holes in the house, and they related the angle of the shot to his military background. Of course, every secret service in the world knows how to stage a murder-suicide, but it would have had to have been a perfect murder.

Why even suspect a conspiracy?
Petra Kelly was known all over the world as the personification of green politics; Bastian had been her inseparable partner since the early 1980s – first, and most visibly, against the deployment of nuclear missiles, and later on a whole series of other political activities.

Had they threatened the neo-Nazis in any direct way?
Bastian had written some letters in the newspapers.

Any signs Kelly was suicidal?
No one who knew her well gives that the slightest credence.

What was Bastian like?
He had an odd history. In World War II, he fought for the Nazis, failed in private business after the war, and went back into the military in 1956. He was a member of CSU – the far-right party – until 1963, when he began a long political transformation that by the 1980s landed him with the Greens. He later resigned, protesting that they were being too soft on communists by just focusing on U.S. missiles.

Why was Petra so attracted to him?
He was the fourth father figure in her life. Her actual father abandoned her at the age of 7. When she was in Brussels after college, she had a well-publicized affair with the president of the European Community – an older man by at least 20 years, married. Later came another affair with an Irish labor leader – also much older, also married. At the time of their deaths, Bastian was the last – he was 69, married; she was 44.

Could Bastian have been suicidal?
Their closest friends felt it possible. In the spring he’d been hit by a taxi and ended up on crutches for months. He had a feeling of frailness and mortality. There were professional troubles, too. They had no office space, no money. Bastian was essentially Kelly’s father and wife. “Baggage-carrier” is the translation of a German word that describes the role he played for her. She responded to hundreds of letters a week. He handled all their logistics. In fact, he was hit by the taxi while running out to get her some bananas because she hadn’t eaten all day – even though it was he who was to give a speech that night. Petra had often said that without Gert she could not make it in life. Behind her charismatic public presence was a person very anxious about life, desperately, afraid of being alone, who didn’t even ride in different taxis than he. She had said to a friend, “I’m destroying Gert’s life and I can’t do without him.” But she couldn’t stop. He was clearly depressed about the rise of violence and the nationalist sentiment in Germany, the breakup of Yugoslavia. It seemed to both of them that after the advances of the 1980s, history was going backward. He wrote a letter decrying this, saying it reminded him of the Germany of his youth. So the psychological scenario is that he was depressed and tired and sick and could not go on, and realized that if he were to go, he had to take her with him.

Was there any kind of suicide note left behind?
No.

Mark Hertsgaard’s profile of Petra Kelly appears in the January [1993] issue of Vanity Fair. He is a regular contributor to Mother Jones.