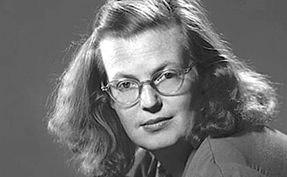 Shirley Hardie Jackson (December 14, 1916 – August 8, 1965) was an American author. She was a popular writer in her time, and her work has received increased attention from literary critics in recent years. She influenced Neil Gaiman, Stephen King, Nigel Kneale, and Richard Matheson.

She is best known for the short story “The Lottery” (1948), which suggests a secret, sinister underside to bucolic small-town America, and for The Haunting of Hill House (1959), which is widely considered to be one of the best ghost stories ever written. In her critical biography of Jackson, Lenemaja Friedman notes that when “The Lottery” was published in the June 26, 1948, issue of The New Yorker, it received a response that “no New Yorker story had ever received”. Hundreds of letters poured in that were characterized by, as Jackson put it, “bewilderment, speculation, and old-fashioned abuse”. In the July 22, 1948, issue of the San Francisco Chronicle, Jackson offered the following in response to persistent queries from her readers about her intentions:

Explaining just what I had hoped the story to say is very difficult. I suppose, I hoped, by setting a particularly brutal ancient rite in the present and in my own village to shock the story’s readers with a graphic dramatization of the pointless violence and general inhumanity in their own lives.

Jackson’s husband, the literary critic Stanley Edgar Hyman, wrote in his preface to a posthumous anthology of her work that “she consistently refused to be interviewed, to explain or promote her work in any fashion, or to take public stands and be the pundit of the Sunday supplements. She believed that her books would speak for her clearly enough over the years.” Hyman insisted the darker aspects of Jackson’s works were not, as some critics claimed, the product of “personal, even neurotic, fantasies”, but that Jackson intended, as “a sensitive and faithful anatomy of our times, fitting symbols for our distressing world of the concentration camp and the Bomb”, to mirror humanity’s Cold War-era fears. Jackson may even have taken pleasure in the subversive impact of her work, as revealed by Hyman’s statement that she “was always proud that the Union of South Africa banned ‘The Lottery’, and she felt that they at least understood the story”.